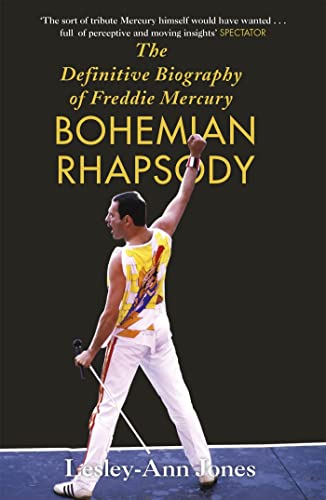 The definitive biography of one of music's greatest legends.

THE TRUE STORY BEHIND THE OSCAR-WINNING, GOLDEN-GLOBE-WINNING FILM.

'Exactly the sort of tribute Mercury himself would have wanted'
Spectator

'No one has captured better than Lesley-Ann Jones the magical, enchanting dualism of Freddie Mercury'
The Times

'This book grabs you with its opening, then builds. Insight and anecdote in perfect harmony'
Simon Napier-Bell

'At last a massive tribute to a massive talent'
Steve Harley, Cockney Rebel

This is the definitive biography of Freddie Mercury, written by award-winning rock journalist Lesley-Ann Jones, who toured widely with Queen and formed lasting friendships with the band. Now, having secured access to the remaining band members and those who were closest to Freddie from childhood to death, Lesley-Ann has written the most in-depth account of one of music's best loved and most complex figures. Meticulously researched, sympathetic, unsensationalised, the book focuses on the period in the 1980s when Queen began to fragment, before their Live Aid performance put them back in the frame. In her journey to understand the man behind the legend, Lesley-Ann Jones has travelled from London to Zanzibar to India.

Packed with exclusive interviews and told with the invaluable perspective that the twenty years since Mercury's death presents, Bohemian Rhapsody is the most up-to-date portrait of a legendary man.

No one has captured better than Lesley-Ann Jones the magical, enchanting dualism of Freddie Mercury. * The Times *
Lesley-Ann Jones asserts that Freddie Mercury's was a "big, extravagant, multifaceted life", and the rock journalist has certainly done a sterling job of documenting it here. * Daily Telegraph, Australia *
'A timely update coinciding with the 40th anniversary of Queen and the 20 years since their frontman's death'. * The Sun *
Exactly the sort of tribute Mercury himself would have wanted ... full of perceptive and moving insights. * Spectator *
Rock journalist Lesley-Ann Jones is lucky enough to have known the man. She toured widely with Queen and formed lasting friendships with the band. It took a while for everyone to open up, but she eventually gained access to Freddie's colleagues and friends, and so we have this thoroughly researched portrait of the man behind the rock legend. * Brisbane Times *
Lesley-Ann Jones is a journalist, newspaper columnist and broadcaster. The author of eight published books, she has enjoyed more than twenty-five years in music and the media. She lives in South-East London with her young children, the eldest having grown up and gone into the music business.
GOR008311489
9781444733693
1444733699
Bohemian Rhapsody: The Definitive Biography of Freddie Mercury by Lesley-Ann Jones
Lesley-Ann Jones
Used - Like New
Paperback
Hodder & Stoughton General Division
2012-06-07
416
N/A
Book picture is for illustrative purposes only, actual binding, cover or edition may vary.
The book has been read, but looks new. The book cover has no visible wear, and the dust jacket is included if applicable. No missing or damaged pages, no tears, possible very minimal creasing, no underlining or highlighting of text, and no writing in the margins
Trustpilot