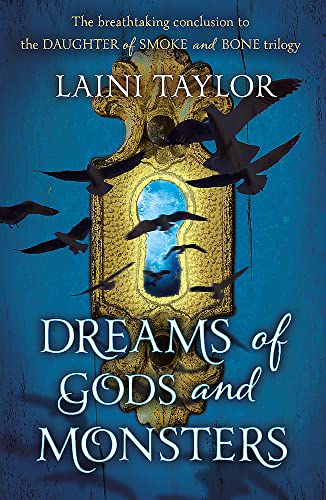 The incredible final novel in Laini Taylor's breathtakingly imaginative Daughter of Smoke and Bone series, DREAMS OF GODS AND MONSTERS

*An Amazon Best Book of the Year*

The final book in the gripping Sunday Times bestselling series.

And, perhaps, for themselves. Toward a new way of living, and maybe even love.

What power can bruise the sky

From the streets of Rome to the caves of the Kirin and beyond, humans, chimaera and seraphim will fight, strive, love, and die in an epic theater that transcends good and evil, right and wrong, friend and enemy. At the very barriers of space and time, what do gods and monsters dream of ? And does anything else matter

This imaginative final novel in the fantasy DAUGHTER OF SMOKE AND BONE series is a gripping page-turner. * Marie Claire *
Plunges us into a world of beauty and horror . . . intricately plotted . . . it's a book that flies between worlds on blood-tipped wings and grips like a magical vice. * Daily Mail *
Fantasy and romance combine. . . If you've ever wondered what would happen if an angel and a devil fell in love, you're about to find out. * Sunday Express *
Thrilling. * Glamour *
Laini Taylor is the the award-winning author of critically acclaimed and New York Times bestselling novels DAUGHTER OF SMOKE AND BONE and DAYS OF BLOOD AND STARLIGHT. She lives in Portland, Oregon with her husband, illustrator Jim Di Bartolo, and their daughter Clementine Pie. Visit her website: www.lainitaylor.com. Follow her on Twitter: twitter.com/lainitaylor
GOR006510753
9781444722758
1444722751
Dreams of Gods and Monsters: The Sunday Times Bestseller. Daughter of Smoke and Bone Trilogy Book 3 by Laini Taylor
Laini Taylor
Daughter of Smoke and Bone Trilogy
Used - Very Good
Paperback
Hodder & Stoughton
2015-03-26
624
N/A
Book picture is for illustrative purposes only, actual binding, cover or edition may vary.
This is a used book - there is no escaping the fact it has been read by someone else and it will show signs of wear and previous use. Overall we expect it to be in very good condition, but if you are not entirely satisfied please get in touch with us
Trustpilot