In Quest of Justice Khaled Fahmy 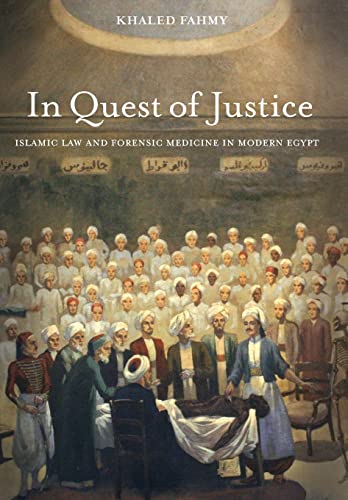 In Quest of Justice by Khaled Fahmy

In Quest of Justice: Islamic Law and Forensic Medicine in Modern Egypt by Khaled Fahmy

The book is written in an elegant style that reads as smoothly as good fiction. . . . Fahmy's interest in legal medicine in nineteenth-century Egypt has led him to make a groundbreaking contribution to Islamic legal studies as well as produce a novel history of the emergence of the modern Egyptian state . . . Above all, In Quest of Justice is a book written with passion and animated by a deep, moving love for Egypt and for its people.

* Journal of the American Oriental Society *
Khaled Fahmy is Sultan Qaboos bin Sa'id Professor of Modern Arabic Studies at the University of Cambridge. He is the author of All the Pasha's Men: Mehmed Ali, His Army and the Making of Modern Egypt.
List of Illustrations
Acknowledgments

Introduction
1 * Medicine, Enlightenment, and Islam
2 * Siyasa, the Forgotten Code
3 * An Olfactory Tale of One City: Cairo in Khedival Times
4 * Law in the Market: H. isba and Forensic Chemistry
5 * Justice without Pain
Conclusion

Notes
Bibliography
Index
NGR9780520279032
9780520279032
0520279034
In Quest of Justice: Islamic Law and Forensic Medicine in Modern Egypt by Khaled Fahmy
Khaled Fahmy
New
Hardback
University of California Press
2018-11-13
392
N/A
Book picture is for illustrative purposes only, actual binding, cover or edition may vary.
This is a new book - be the first to read this copy. With untouched pages and a perfect binding, your brand new copy is ready to be opened for the first time
Trustpilot