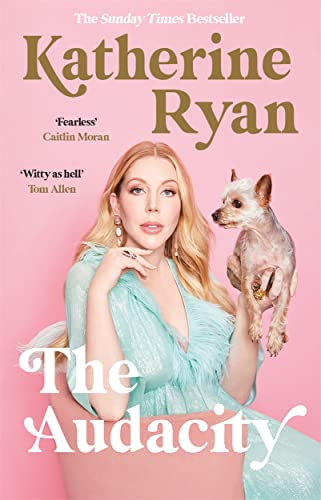 The Audacity by Katherine Ryan

From the star of The Duchess and the host of 'Telling Everybody Everything', the debut book from superstar comedian Katherine Ryan.

From the star of Netflix's The Duchess and host of 'Telling Everybody Everything' 'I've come to accept that being audacious is a gift I can't escape.' People 'know' my on-stage comedy persona or my scripted ballsy characters and wrongly assume that at home, I must stomp around all day in designer dresses eviscerating those who dare to cross my path and denouncing the existence of men in general. But mostly, I'm just sat eating pickles and being nice to some dogs. Whatever strangers think of me is fine with me. How audacious is that? I can always take a joke, I don't waste time worrying about things I can't control, and I have zero anxiety. I embrace the reality that you just can't please everyone, so you might as well put yourself out there and have a laugh. As my mother always said, 'Katherine, if we all liked the same thing, we'd all be married to your father'. I'm often asked how I developed my lurid level of courage and assurance and for tips on how others can match. The Audacity is my chance to share my blueprint for just that. You will learn: How to Become The Most Popular Girl in School How to Waste All Your Money on Designer Dogs How to Attract Toxic Men... AND Keep Them Interested! And so much more... Plus, secrets! Secrets are my favourite things to be told and I figured I'd better tell a few juicy ones myself. Why not? No matter what I do, there will always be something about me that reads as simply, outrageously audacious. And I wouldn't have it any other way.
A fearless origin story that shows women how to be absolutely fucking awesome at all times * Caitlin Moran *
Outrageously brilliant! Katherine's straight-talking, no-nonsense book is the honesty we all need. I'm buying this for all my friends * Laura Whitmore *
Like Katherine, this book is witty as hell, sharp as a razor and yet still sensitive, insightful and kind * Tom Allen *
Massively recommend... I laughed, cried a little and ended up feeling proud to be a strange, small-town sister * Scarlett Moffatt *
Katherine is one of the smartest, funniest voices in comedy... an icon of our time. This book is absolutely hilarious, deeply insightful and truly original. You will love and devour The Audacity * Lou Sanders *
Like Katherine Ryan herself, The Audacity is hilarious, sharp and brilliantly honest * Josh Widdicombe *
The Audacity is exhilarating - fierce, funny and brilliantly written, but there is so much tenderness, honesty and generosity too * Daisy Buchanan *
There is nothing more powerful and dick shrivelling than an audaciously liberated woman living her truth. This book feels like a hilarious and comforting hug from your best friend * Grace Campbell *
Award-winning comedian, writer, presenter and actress, TV's Katherine Ryan, is currently dominating the television and live comedy scenes, both in the UK and abroad. Born and raised in Canada, she has lived in the UK since 2008 and currently lives in London with her daughter Violet and husband Bobby. Katherine created, starred in, wrote and executive produced her Netflix Original sitcom, The Duchess, which was released in September 2020 and leapt to the top of the UK chart. Her latest stand-up show, Glitter Room, had a four-week sold-out run at London's Garrick Theatre following a sell-out nationwide tour. Katherine has filmed two critically-acclaimed Netflix stand-up specials - Glitter Room and In Trouble. She was only the second UK-based comedian to release a 60-minute global Netflix special, after Jimmy Carr and until December 2020, she was the only woman. She was also a judge on Netflix's first panel show The Fix. Katherine will soon be seen hosting primetime BBC Two jewellery-making competition series, All That Glitters. She hosted the marquee all-female special of Channel 4's Cats Does Countdown and was a team captain on the most recent series of 8 Out of 10 Cats for E4. Katherine also co-hosted C4's 2019 tentpole Alternative Election Special with Krishnan Guru Murthy. She has been a stalwart on all the UK's major panel shows and has co-hosted six series of Your Face or Mine, alongside judging four series of Roast Battle for Comedy Central. Outside of television, Katherine has sold-out venues across the world with her unique stand-up shows. Her upcoming 2021/2022 live show, MISSUS, will tour later this year with Live Nation. Katherine launched her hugely successful podcast, Telling Everybody Everything, in 2020 and it went straight to the top of the iTunes UK podcast chart. Find Katherine on Twitter, Instagram and Facebook.
GOR011841438
9781788703987
1788703987
The Audacity: The first memoir from superstar comedian Katherine Ryan by Katherine Ryan
Katherine Ryan
Used - Good
Hardback
Bonnier Books Ltd
20210930
336
N/A
Book picture is for illustrative purposes only, actual binding, cover or edition may vary.
This is a used book - there is no escaping the fact it has been read by someone else and it will show signs of wear and previous use. Overall we expect it to be in good condition, but if you are not entirely satisfied please get in touch with us
Trustpilot