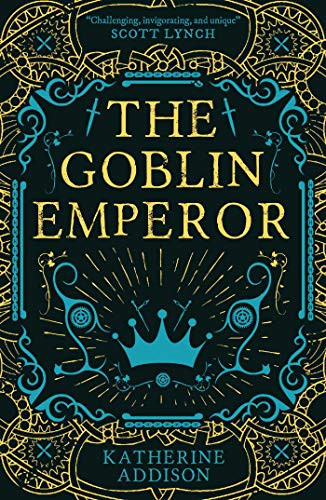 The Goblin Emperor by Katherine Addison

The Goblin Emperor by Katherine Addison

"It delighted me from beginning to end." - Katherine Arden, bestselling author of The Bear And The Nightingale

Maia, the youngest, half-goblin son of the Emperor has lived his entire life in exile, distant from the Imperial Court and the deadly intrigue that suffuses it. But when his father and three sons in line for the throne are killed in an "accident," he has no choice but to take his place as the only surviving rightful heir.

Entirely unschooled in the art of court politics, he has no friends, no advisors, and the sure knowledge that whoever assassinated his father and brothers could make an attempt on his life at any moment.

Surrounded by sycophants eager to curry favour with the naive new emperor, and overwhelmed by the burdens of his new life, he can trust nobody. Amid the swirl of plots to depose him, offers of arranged marriages, and the spectre of the unknown conspirators who lurk in the shadows, he must quickly adjust to life as the Goblin Emperor.

"A novel of court intrigue [...] those of you who like that aspect of my own work will probably like The Goblin Emperor as well." -- George R. R. Martin, Not a Blog

"With its subtle, intricate, fascinating world building and a hero who succeeds through empathy and patience rather than brawn, The Goblin Emperor is absolutely unique among recent fantasy novels, and it delighted me from beginning to end." - Katherine Arden, bestselling author of The Bear And The Nightingale

"The Goblin Emperor is the best fantasy I've read in quite some time" - Liz Bourke, Tor.com

KATHERINE ADDISON's short fiction has been selected by The Year's Best Fantasy and Horror and The Year's Best Science Fiction. As Sarah Monette, she is the author of the Doctrine of Labyrinths series and the Locus Award-winning novel The Goblin Emperor; and co-author, with Elizabeth Bear, of the Iskryne series. She lives near Madison, Wisconsin.
NGR9781781087305
9781781087305
178108730X
The Goblin Emperor by Katherine Addison
Katherine Addison
New
Paperback
Rebellion
2018-03-21
480
N/A
Book picture is for illustrative purposes only, actual binding, cover or edition may vary.
This is a new book - be the first to read this copy. With untouched pages and a perfect binding, your brand new copy is ready to be opened for the first time
Trustpilot