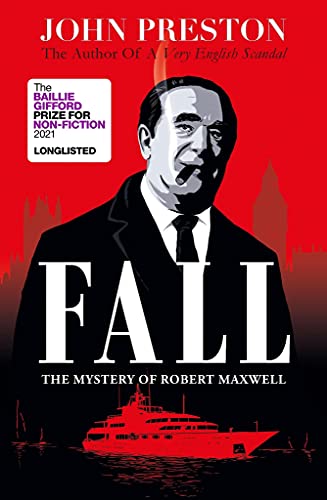 Fall: The Mystery of Robert Maxwell by John Preston

A LITERARY HIGHLIGHT FOR 2021 IN THE TIMES, SUNDAY TIMES, GUARDIAN AND OBSERVER

'The best biography yet of the media magnate Robert Maxwell - by turns engrossing, amusing and appalling' Robert Harris, Sunday Times

From the bestselling author of A Very English Scandal, the jaw-dropping life story of the notorious business tycoon Robert Maxwell.

In February 1991, the media mogul and former MP Robert Maxwell made a triumphant entrance into Manhattan harbour aboard his yacht, the Lady Ghislaine, to complete his purchase of the ailing New York Daily News. Crowds lined the quayside to watch his arrival, taxi drivers stopped their cabs to shake his hand and children asked for his autograph. But just ten months later, Maxwell disappeared from the same yacht off the Canary Islands, only to be found dead in the water soon afterward.

Maxwell was the embodiment of Britain's post-war boom. Born an Orthodox Jew, he had escaped the Nazi occupation of Czechoslovakia, fought in World War 2, and was decorated for his heroism with the Military Cross. He went on to become a Labour MP and an astonishingly successful businessman, owning a number of newspapers and publishing companies. But on his death, his empire fell apart, as long-hidden debts and unscrupulous dealings came to light. Within a few days, Maxwell was being reviled as the embodiment of greed and corruption. No one had ever fallen so far and so quickly.

What went so wrong? How did a war hero and model of society become reduced to a bloated, amoral wreck? In this gripping book, John Preston delivers the definitive account of Maxwell's extraordinary rise and scandalous fall.

'Preston is a natural storyteller' The Times

'This is the best biography yet of the media magnate Robert Maxwell - by turns engrossing, amusing and appalling... it slips down as richly, easily and pleasurably as a tablespoonful of Beluga caviar' -- Robert Harris * Sunday Times *

* Mail on Sunday *
'This is such a richly detailed, well-written, gripping biography I wished it could have been twice as long' -- Lynn Barber * Daily Telegraph *
'I have a shelf full of books about frauds, but this one is by far the most enjoyable. By turns self-righteous and revolting, Maxwell makes the perfect villain' -- Craig Brown * Mail on Sunday *
'Any good biography of a mountebank depicts not only its subject but also the ambivalent society that accommodated the monster. John Preston's Fall does this with deft understatement ... Preston's A Very English Scandal used an almost novelistic eye to revive a well-worn scandal. Fall is equally satisfying' -- Quentin Letts * The Times *
'An absorbing profile of the war hero turned rogue ... Preston comes to his subject with the advantage both of hindsight and his great skill at exposing hypocrisy and subterfuge ... he has an eye for the telling detail and an ear for the revealing quote' * Observer, Book of the Week *
'There have been many books written about Robert Maxwell, but surely none as pacy, entertaining and jaw-dropping as this one... yes, this is quite a book' * Daily Mail *
'Preston has written a wonderfully entertaining book and interviewed almost everyone who crossed Maxwell's path in his heyday. He has an eye for comedy and drama and, where he explains his subject's shady and dauntingly complex business dealings, he does so clearly and succinctly' * New Statesman *
'Irresistible page-turning pace ... what emerges from Fall is a vividly grotesque picture of the emperor showing off his nonexistent new clothes to an applauding crowd of courtiers - politicians, editors, bankers - who all too willingly suspended any disbelief they may have felt' -- Francis Wheen * Spectator *
'John Preston's book Fall, a recounting of the life of one of the most extraordinary figures in British corporate life, is timely ... almost 30 years since Maxwell died at sea in unexplained circumstances, it is possible to look back on his story and the fraud as a great, sweeping whole, a bridge from the second world war to the last years of the media barons before the internet began ... Preston tells the story well ... its strength is in telling the grand sweep of an extraordinary life' * Financial Times *
'Vivid ... Preston (has a) gift for the kind of wry comedy that suits English decline' * Guardian, Book of the Day *
'John Preston's research for this terrific biography is extensive; he interviewed three of Maxwell's children and his sister. But he also presents a large character at the heart of a gripping novel which happens to be true' * Evening Standard *
'Thanks to Preston's fine writing, Fall fizzes along at pace and is engrossing as it charts Maxwell's astonishing life - and how he came to be so widely reviled' * i *
'John Preston tells [the story of Maxwell] with great verve and the benefit of extensive interviews with, among others, Maxwell's one-time rival Rupert Murdoch... the portrait that emerges is more subtly drawn than previous ones' * Economist *
'John Preston brings the old crook and liar magnificently to life in this sparkling biography... this beautifully written book provides many moments of high and low comedy... Preston's sharp eye for the ridiculous and the piquant conjures up a lost Fleet Street world' * Jewish Chronicle *
'Preston is a natural storyteller' -- The Times
John Preston is a former Arts Editor of the Evening Standard and the Sunday Telegraph. For ten years he was the Sunday Telegraph's television critic and one of its chief feature writers. His novel, The Dig, based on the 1939 archaeological excavation at Sutton Hoo in Suffolk, has been filmed starring Ralph Fiennes, Carey Mulligan and Lily James. His first nonfiction book, A Very English Scandal, was published to great acclaim in 2016 and turned into BAFTA-winning BBC drama series. His latest book, Fall, tells the story of the rise and fall of the politician and business magnate Robert Maxwell.
GOR011337633
9780241388679
0241388678
Fall: The Mystery of Robert Maxwell by John Preston
John Preston
Used - Good
Hardback
Penguin Books Ltd
20210204
352
null null null null null null null null null null
Book picture is for illustrative purposes only, actual binding, cover or edition may vary.
This is a used book - there is no escaping the fact it has been read by someone else and it will show signs of wear and previous use. Overall we expect it to be in good condition, but if you are not entirely satisfied please get in touch with us
Trustpilot