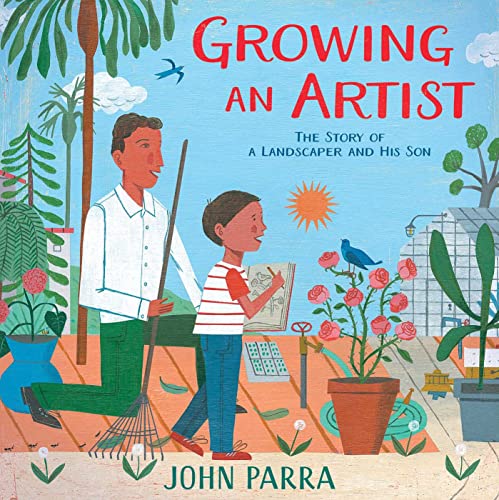 Growing an Artist by John Parra

Growing an Artist: The Story of a Landscaper and His Son by John Parra

From award-winning artist John Parra comes a heartwarming family story that underscores the value of creativity, passion, and hard work (Kirkus Reviews, starred review) that is a love letter to sons and their fathers (BookPage, starred review) based on his childhood experience.

Today is a big day-the first time Juanito gets to help his papi on the job as a landscape architect! Throughout the day, Juanito sketches anything that catches his eye: a nest full of baby birds, a nursery with row upon row of plants and flowers, and more. Father and son travel from house to house, pruning, weeding, mowing, and turning overgrown and chaotic yards into beautiful spaces.

A few of the clients don't appreciate Papi's hard work, like Juanito's classmate who pretends not to see him. But Papi always feels pride in owning his own business and in a job well done. And at the end of the day, Juanito may get the chance to turn his artistic eye toward landscape design-just like his papi.
A young artist helps his father on the job.

In this autobiographical tale, author/illustrator Parra recounts his childhood experience of tagging along to work with his papi, an independent landscape contractor, for the first time. Young John learns new skills as he, Papi, and Papi's assistant, Javier, tame a wild yard. He even has the opportunity to sketch a nest of baby birds between tasks. John is dismayed when he encounters a classmate who ignores him while he works. Father and son continue their day, making purchases at a nursery and completing jobs all over town. John becomes immersed in his ideas for a new landscape design and works alongside his dad to commit a beautiful layout to paper. He is so busy that he is able to forget the earlier awkward encounter with his classmate. A few weeks later, the design John helped to draw comes to life as the team landscapes a new yard according to the plan. Taking great pride in his work but remembering the dismissive attitude of his classmate, John vows that I will use my art to tell the stories of hardworking, passionate people who make the world more beautiful. Parra's acrylic paint artwork is colorful and sumptuous, with lots of interesting details. John's father is from Mexico, and characters are depicted with skin tones ranging from tan to dark brown. (This book was reviewed digitally.)

-- Kirkus Reviews, STARRED REVIEW * 3/15/2022 *
Today is a momentous day for young Juan. After years of hearing about his father's landscaping business, Juan will come along to help for the first time, armed not only with gardening supplies but also with a sketchbook and drawing tools.

During this perfectly ordinary but splendidly memorable day, Juan assists Papi and another worker, Javier, as they rake leaves, mow lawns and prune bushes. He accompanies them to a gardening supply store, where they select plants and flowers for a client. He also joins them at the dump, where the branches and other waste they have collected will be turned into mulch. Finally, the budding artist meets Papi's new clients, listens to their vision for their overgrown yard and sketches out a design for their future garden. Inspired by his father, Juan is learning how to make the world more beautiful.

In a note at the end of John Parra's heartfelt picture book Growing an Artist: The Story of a Landscaper and His Son, the author-illustrator reveals that Juan's story is autobiographical. Working with his father as a young boy inspired Parra to consider a career in landscape architecture and design, though he ultimately took a different path and trained as a fine artist. A photograph of Parra and his father accompanies the note, and the book's landscaping blueprint endpapers contain a designer's mark for Del Parra Landscape Constr.

Parra incorporates Spanish words and phrases into the text and touches on the importance of Latin American migrant workers to the landscaping industry. It's an underappreciated job that requires creativity and demanding physical labor. An early scene delicately depicts Juan's growing recognition of such prejudice: Juan waves to a classmate who is neighbors with one of Papi's clients, but the boy looks away and pretends not to see me, and Juan's heart sinks.

Honoring the great pride that Parra's father took in his landscaping work, Parra's characteristically vibrant and finely detailed acrylic illustrations in Growing an Artist depict people and plants with equal affection and respect. The way that Papi points out natural beauties to his artistic young son is tender and moving, and a scene in which he gently lifts a branch to reveal a hidden bird's nest is especially lovely.

Growing an Artist is a love letter to sons and their fathers, to work done with one's hands and to making the world more beautiful, no matter what tools are used to do so. -- BookPage, *STARRED REVIEW* * 5/10/2022 *
K-Gr 2-Sincere and lively with illustrative detail, Parra's story reveals how his personal sense of creativity and esteem for hard work grew during his childhood experiences with his papi's landscape company. Readers follow young Juanito for a full day as he accompanies his father to work for the first time. As he readily sketches and helps Papi with landscape work, readers meet the role models in Juanito's childhood world-not just Papi but also long-time employee, Javier, from Mexico. This story offers teachable moments about the different but equally important roles that create a thriving community. The wood texture of Parra's illustrations shows a mix of multi-sized, acrylic elements, while the greenery and blocky layers of straight and curved edges appear like a refreshing mosaic of solid shapes and color. In an author's note, Parra delves deeper his father's life story. VERDICT In a reflective nod to his youthful days spent with his father, Parra presents a balanced, intricate illustrative style to convey his earnest appreciation for hard work, lessons, and creative influence. -Rachel Mulligan -- School Library Journal, *STARRED REVIEW* * 5/20/2022 *
John Parra's illustrations for Frida Kahlo and Her Animalitos, written by Monica Brown, earned the book a New York Times Best Illustrated Book designation. He also illustrated Green Is a Chile Pepper: A Book of Colors by Roseanne Thong, which received a Pura Belpre Honor and the Americas Book Award: Commended; Marvelous Cornelius: Hurricane Katrina and the Spirit of New Orleans by Phil Bildner, which won the Golden Kite Award for Picture Book Illustration and was a Bank Street Best Book of the year; and Hey, Wall, by Susan Verde, which School Library Journal called a must-purchase in a starred review. Learn more at JohnParraArt.com.
GOR012596019
9781534469273
1534469273
Growing an Artist: The Story of a Landscaper and His Son by John Parra
John Parra
Used - Very Good
Hardback
Simon & Schuster
20220510
40
N/A
Book picture is for illustrative purposes only, actual binding, cover or edition may vary.
This is a used book - there is no escaping the fact it has been read by someone else and it will show signs of wear and previous use. Overall we expect it to be in very good condition, but if you are not entirely satisfied please get in touch with us
Trustpilot