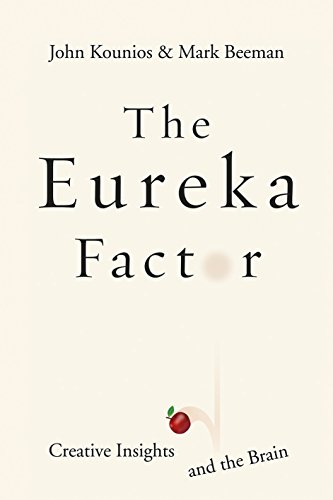 The Eureka Factor by John Kounios

Where do great ideas come from? What actually happens in your brain during a 'Eureka' moment? And how can we have more of them? This book reveals how sudden insights are formed in the brain, how we can increase our chances of generating them, and how they impact our thinking.

The Eureka Factor: Creative Insights and the Brain by John Kounios

Where do great ideas come from? What actually happens in your brain during a 'Eureka' moment? And how can we have more of them?

It has been two millenia since Archimedes supposedly first shouted 'Eureka!' as he sat in his bath. The word - Greek for 'I have found it' - captures the feeling we have all experienced during moments of sudden insight. Despite a century of scientific inquiry into the nature of these particular moments, their origin has remained a mystery.

Mark Beeman and John Kounios, leading experts on the neural bases of insight and creative thinking, have conducted pioneering neuroimaging research examining brain activity at and before these moments of clarity. In The Eureka Factor they reveal exactly how sudden insights are formed in the brain, how we can increase our chances of generating them, and how they impact our thinking.

Helping to unlock the mechanisms behind intuitive flashes and inspiration, this groundbreaking account not only explains the science of insight, but also describes the keys to innovation and creativity.

A very good book about insights ... Kounios and Beeman are good storytellers. * Evening Standard *
An incredible accomplishment ... a fascinating guide to how advances in science are made in general ... Wonderful ideas appear as if out of nowhere - and we are delighted. * Wall Street Journal *
A vigorous voyage inside the mind to understand those electrifying but elusive moments of discovery - and how we can have them more often. -- Adam Grant, New York Times bestselling author of Give and Take
The Eureka Factor is a highly engaging and informative look into the fascinating topic of sudden creative insights. Kounios and Beeman convincingly show that what once seemed like a mysterious feature of the human mind is yielding to dramatic advances in psychology and neuroscience. Combining state-of-the-art research with compelling everyday examples, this book is essential reading for anyone who has ever wondered what makes it possible to experience an 'Aha' moment. -- Daniel L. Schacter, William R. Kenan, Jr. Professor of Psychology, Harvard University, and author of The Seven Sins of Memory: How the Mind Forgets and Remembers
The Eureka Factor presents a fascinating and illuminating account of the creative process and how to foster it. -- James J. Heckman, Nobel laureate in economics

Dr John Kounios is Professor of Psychology at Drexel University and has published cognitive neuroscience research on insight, creativity, problem solving, memory, knowledge representation and Alzheimer's disease. He has held research and faculty positions at Princeton University, the University of Pennsylvania, and the National Center for Post-Traumatic Stress Disorder and is a Fellow of the Association for Psychological Science. He lives with his wife and children in the Philadelphia area.

Dr Mark Beeman is Professor of Psychology and Neuroscience at Northwestern University, and researches creative problem solving and creative cognition, language comprehension and how the right and left hemispheres process information. He is a Fellow of the Association for Psychological Science and a Kavli Fellow of the National Academy of Sciences. He and his children live just outside Chicago.

Dr Kounios' and Dr Beeman's insight research is displayed in an exhibit in the Museum of Science and Industry in Chicago. Their work has been reported by The Times, the New Yorker, the New York Times, the Wall Street Journal, BBC's Horizon, National Public Radio, Scientific American Mind, O, The Oprah Magazine and other international print and electronic media.

GOR006685395
9780434019823
0434019828
The Eureka Factor: Creative Insights and the Brain by John Kounios
John Kounios
Used - Very Good
Hardback
Cornerstone
20150409
288
N/A
Book picture is for illustrative purposes only, actual binding, cover or edition may vary.
This is a used book - there is no escaping the fact it has been read by someone else and it will show signs of wear and previous use. Overall we expect it to be in very good condition, but if you are not entirely satisfied please get in touch with us
Trustpilot