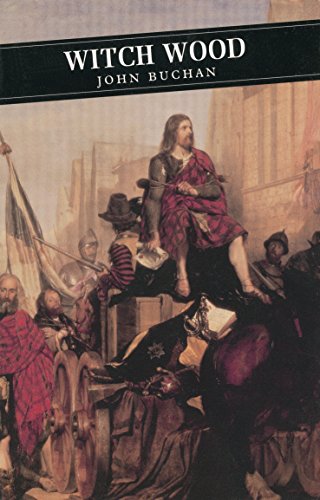 Set against the religious struggles of seventeenth-century Scotland, with Montrose for the king against a convenanted kirk, John Buchan's Witch Wood is a gripping atmospheric tale in the spirit of Stevenson and Neil Munro.

As a moderate Presbyterian minister, young David Sempill disputes with the extremists of his faith.

Set against the religious struggles of seventeenth-century Scotland, with Montrose for the king against a convenanted kirk, John Buchan's Witch Wood is a gripping atmospheric tale in the spirit of Stevenson and Neil Munro.

As a moderate Presbyterian minister, young David Sempill disputes with the extremists of his faith. All around, the defeated remnants of Montrose's men are being harried and slaughtered by the faithful, and Sempill's plea for compassion, like his love for the beautiful Katrine Yester, is out of joint with the times.

There are still older conflicts to be faced however, symbolised by the presence of the Melanudrigill Wood, a last remnant of the ancient Caledonian forest. Here there is black magic to be uncovered, but also the more positive pre-Christian intimations of nature worship.

In such setting, and faced with the onset of the plague, David Sempill's struggle and eventual disappearance take on a strange and timeless aspect in what was John Buchan's own favourite among his many novels.

John Buchan (1875-1940), had a long and successful literary and public career. He was educated in Glasgow, where his father was a Free Church minister in the Gorbals, but his childhood holidays were spent in the Scottish border country.

After graduating at Glasgow University, Buchan took a scholarship to Oxford where he wrote his first two historical novels while still an undergraduate. With interests in law and journalism, he worked for the British High Commission in South Africa at the end of the Boer War. Returning to London in 1903, he eventually became a director of Thomas Nelson the publishers. Buchan worked for the Ministry of Information during WWI, and later wrote a substantial history of the conflict. He became a Tory MP for the Scottish Universities from 1927 to 1935, in which year he was appointed Governor-General of Canada as Lord Tweedsmuir.

Buchan took pride in the craft of story-telling and he is probably best known for his Richard Hannay thriller, with six titles ranging from The Thirty-Nine Steps in 1915, to The Island of Sheep in 1936. His other fiction includes John Burnet of Barns (1898), Prester John (1910), Huntingtower (1922), John Macnab (1925), Witchwood (1927) and Sick Hear River, published posthumously in 1941.

Buchan's health had never been strong, yet he achieved an enormous literary output in the course of his life, with no fewer than 30 novels and over 60 non-fiction books, including the fine biographies of Walter Scott and James Graham the Marquis of Montrose, whom he greatly admired. His autobiography Memory Hold-the-door, was published in the year of his death form a cerebral stroke.

GOR001506997
9780862412029
0862412021
Witch Wood by John Buchan
John Buchan
Canongate Classics
Used - Very Good
Paperback
Canongate Books Ltd
1998-01-03
312
N/A
Book picture is for illustrative purposes only, actual binding, cover or edition may vary.
This is a used book - there is no escaping the fact it has been read by someone else and it will show signs of wear and previous use. Overall we expect it to be in very good condition, but if you are not entirely satisfied please get in touch with us
Trustpilot