This Was a Man Jeffrey Archer 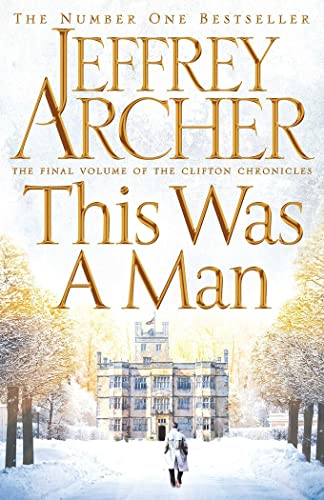 This Was a Man by Jeffrey Archer

The thrilling conclusion to the number one bestselling Clifton Chronicles.

This Was a Man by Jeffrey Archer

This Was a Man is the seventh and final, captivating instalment of the Clifton Chronicles from master storyteller Jeffrey Archer.

This Was a Man opens with a shot being fired, but who pulled the trigger, and who lives and who dies?

In Whitehall, Giles Barrington discovers the truth about his wife Karin from the Cabinet Secretary. Is she a spy or a pawn in a larger game?

Harry Clifton sets out to write his magnum opus, while his wife Emma completes her ten years as Chairman of the Bristol Royal Infirmary, and receives an unexpected call from Margaret Thatcher offering her a job.

Sebastian Clifton becomes chairman of Farthings Kaufman bank, but only after Hakim Bishara has to resign for personal reasons. Sebastian and Samantha's talented daughter, Jessica, is expelled from the Slade School of Fine Art, but her aunt Grace comes to her rescue.

Meanwhile, Lady Virginia is about to flee the country to avoid her creditors when the Duchess of Hertford dies, and she sees another opportunity to clear her debts and finally trump the Cliftons and Barringtons.

In a devastating twist, tragedy engulfs the Clifton family when one of them receives a shocking diagnosis that will throw all their lives into turmoil.

Jeffrey Archer, whose novels and short stories include Kane and Abel, A Prisoner of Birth and Cat O' Nine Tales, has topped the bestseller lists around the world, with sales of over 275 million copies. He is the only author ever to have been a number one bestseller in fiction, short stories and non-fiction (The Prison Diaries). The author is married to Dame Mary Archer, and they have two sons, two grandsons and a granddaughter.
GOR007898972
9781447252245
1447252241
This Was a Man by Jeffrey Archer
Jeffrey Archer
The Clifton Chronicles
Used - Very Good
Hardback
Pan Macmillan
2016-10-25
432
N/A
Book picture is for illustrative purposes only, actual binding, cover or edition may vary.
This is a used book - there is no escaping the fact it has been read by someone else and it will show signs of wear and previous use. Overall we expect it to be in very good condition, but if you are not entirely satisfied please get in touch with us
Trustpilot