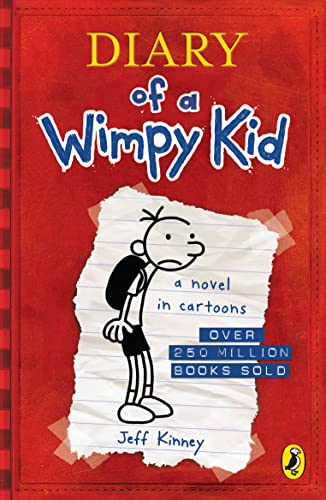 Diary Of A Wimpy Kid (Book 1) by Jeff Kinney

This was Mom's idea, not mine. But if she thinks I'm going to write down my "feelings" in here or whatever, she's crazy. The only reason I agreed to do this at all is because I figure later on when I'm rich and famous, this book is gonna come in handy. But for now I'm stuck with a bunch of morons.

Diary Of A Wimpy Kid (Book 1) by Jeff Kinney

The first in Jeff Kinney's side-splitting series, join Greg Heffley as he's thrust into a new year, and a new school, where undersize weaklings share the corridors with kids who are taller, meaner and already shaving.

I'll be famous one day, but for now I'm stuck in middle school with a bunch of morons.

Desperate to prove his new found maturity, which only going up a grade can bring, Greg is happy to have his not-quite-so-cool sidekick, Rowley, along for the ride.

But when Rowley's star starts to rise, Greg tries to use his best friend's popularity to his own advantage.

Recorded in his diary with comic pictures and his very own words, this test of Greg and Rowley's friendship unfolds with hilarious results.

Laugh until you cry at all of Greg's hopeless shenanigans. Diary of a Wimpy Kid has got millions of kids reading and laughing at (but mostly with) the famous Greg Heffley.

If you're on the lookout for a funny children's book for 7+, especially a book for reluctant readers, you can't go wrong with the Diary of a Wimpy Kid series.

The world has gone crazy for Jeff Kinney's Diary of a Wimpy Kid series * Sun *
Kinney is right up there with JK Rowling as one of the bestselling children's authors on the planet * Independent *
Hilarious! * Sunday Telegraph *
The most hotly anticipated children's book of the year is here - Diary of a Wimpy Kid * The Big Issue *
Jeff Kinney is the #1 USA Today, New York Times, and Wall Street Journal bestselling author of the Diary of a Wimpy Kid series and a six-time Nickelodeon Kids' Choice Award winner for Favorite Book. The Meltdown, book 13, was published in October 2018, and was a #1 bestselling book. His latest book, Diary of an Awesome Friendly Kid: Rowley Jefferson's Journal, was published in April 2019 and was an instant #1 global bestseller. Jeff has been named one of Time magazine's 100 Most Influential People in the World. He is also the creator of Poptropica, which was named one of Time's 50 Best Websites. He spent his childhood in the Washington, D.C., area and moved to New England in 1995. Jeff lives with his wife and two sons in Massachusetts, where they own a bookstore, An Unlikely Story.
GOR001267629
9780141324906
0141324902
Diary Of A Wimpy Kid (Book 1) by Jeff Kinney
Jeff Kinney
Diary of a Wimpy Kid
Used - Very Good
Paperback
Penguin Books Ltd
2008-07-03
224
N/A
Book picture is for illustrative purposes only, actual binding, cover or edition may vary.
This is a used book - there is no escaping the fact it has been read by someone else and it will show signs of wear and previous use. Overall we expect it to be in very good condition, but if you are not entirely satisfied please get in touch with us
Trustpilot