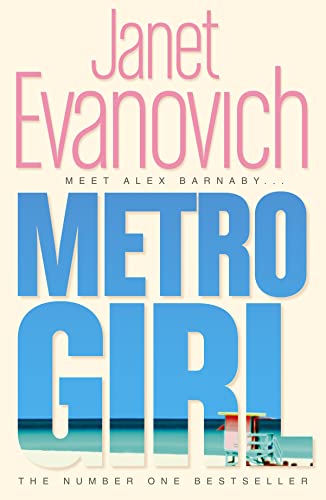 Buckle your seat belts. Number One bestselling author Janet Evanovich is moving into the fast lane with Metro Girl, a thrilling, high-octane misadventure with high stakes, hot nights, cold-blooded murder, sunken treasure, a woman with a chassis built for speed, and one very good, very sexy stock-car racer who's along for the ride.

When "Wild" Bill Barnaby drops off the face of the earth, big sister Alex heads for Miami to save her brother. Battling bad-hair-day humidity, Miami hit men, and Palmetto bugs big enough to eat her alive, Alex pursues Bill's trail through the bars of South Beach then south to Key West and Cuba.

Turns out, in his haste to leave town, Bill "borrowed" a yacht belonging to Sam Hooker, hero of the NASCAR circuit. Hooker figures he'll attach himself to Alex and maybe run into scumbag Bill. Maybe even get lucky in love with Bill's sweetie pie sister. After all, he is very good at revving a woman's engine.

The race to the finish is hot and hard, taking Alex and Hooker into international waters, exposing a plot to grab Cuban gold and a sinister relic of the Cuban missile crises.

'Hilarious reading, with a gorgeous fistful of believable and only occasionally murderous eccentrics' Mail on Sunday

'Evanovich's comic surrealism is in the same league as Carl Hiaasen's' Marcel Berlins, The Times

'The pace never flags, the humour is grandly surreal and the dialogue fairly sizzles off the page' Irish Times

Janet Evanovich grew up in New Jersey, but now lives in New Hampshire. Her series of books featuring Stephanie Plum has won her millions of fans and frequently been on the bestseller lists. She has received many awards including the Crime Writers' Association John Creasey Award and CWA Silver Dagger Award.

GOR006152823
9780007176229
0007176228
Metro Girl by Janet Evanovich
Janet Evanovich
Used - Very Good
Paperback
HarperCollins Publishers
2004-11-02
304
N/A
Book picture is for illustrative purposes only, actual binding, cover or edition may vary.
This is a used book - there is no escaping the fact it has been read by someone else and it will show signs of wear and previous use. Overall we expect it to be in very good condition, but if you are not entirely satisfied please get in touch with us
Trustpilot