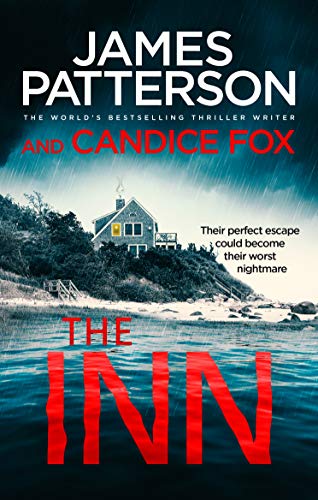 The Inn by James Patterson

The Inn at Gloucester stands alone on the rocky New England shoreline. As long as the dozen residents pay their rent, Robinson doesn't ask any questions.

Yet all too soon Robinson discovers that leaving the city is no escape from dangers he left behind.

The Inn: Their perfect escape could become their worst nightmare by James Patterson

The Inn at Gloucester stands alone on the rocky New England shoreline.

Yet all too soon Robinson discovers that leaving the city is no escape from dangers he left behind. A new crew of deadly criminals move into the small town, bringing drugs and violence to the front door of the inn.

Robinson feels the weight of responsibility on his shoulders. His sense of duty compels him to fight off the threat to his town. But he can't do it alone. Before time runs out, the residents of the inn will face a choice.

Stand together? Or die alone.

James Patterson (Author)
JAMES PATTERSON is one of the best-known and biggest-selling writers of all time. His books have sold in excess of 385 million copies worldwide. He is the author of some of the most popular series of the past two decades - the Alex Cross, Women's Murder Club, Detective Michael Bennett and Private novels - and he has written many other number one bestsellers including romance novels and stand-alone thrillers.

James is passionate about encouraging children to read. Inspired by his own son who was a reluctant reader, he also writes a range of books for young readers including the Middle School, I Funny, Treasure Hunters, Dog Diaries and Max Einstein series. James has donated millions in grants to independent bookshops and has been the most borrowed author of adult fiction in UK libraries for the past eleven years in a row. He lives in Florida with his wife and son.

Candice Fox (Author)
Candice Fox is the middle child of a large, eccentric family from Sydney's western suburbs. The daughter of a parole officer and an enthusiastic foster-carer, Candice spent her childhood listening around corners to tales of violence, madness and evil as her father relayed his work stories to her mother and older brothers.

GOR010457290
9781787462441
1787462447
The Inn: Their perfect escape could become their worst nightmare by James Patterson
James Patterson
Used - Very Good
Paperback
Cornerstone
2020-03-19
400
N/A
Book picture is for illustrative purposes only, actual binding, cover or edition may vary.
This is a used book - there is no escaping the fact it has been read by someone else and it will show signs of wear and previous use. Overall we expect it to be in very good condition, but if you are not entirely satisfied please get in touch with us
Trustpilot