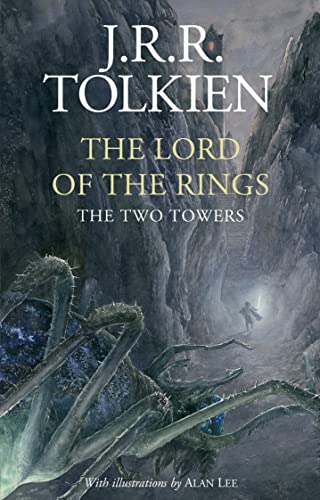 The Two Towers is the second part of J.R.R. Tolkien's epic adventure, The Lord of the Rings.

The Two Towers is the second part of J.R.R. Tolkien's epic adventure, The Lord of the Rings.

Frodo and the Companions of the Ring have been beset by danger during their quest to prevent the Ruling Ring from falling into the hands of the Dark Lord by destroying it in the Cracks of Doom. They have lost the wizard, Gandalf, in the battle with an evil spirit in the Mines of Moria; and at the Falls of Rauros, Boromir, seduced by the power of the Ring, tried to seize it by force. While Frodo and Sam made their escape the rest of the company were attacked by Orcs.

Now they continue their journey alone down the great River Anduin - alone, that is, save for the mysterious creeping figure that follows wherever they go.

The text of this edition has been fully corrected and revised in collaboration with Christopher Tolkien and is accompanied by sixteen watercolour paintings from Alan Lee.

'An extraordinary book. It deals with a stupendous theme. It leads us through a succession of strange and astonishing episodes, some of them magnificent, in a region where everything is invented, forest, moor, river, wilderness, town and the races which inhabit them.'
The Observer

'Among the greatest works of imaginative fiction of the twentieth century.'
Sunday Telegraph

'The English-speaking world is divided into those who have read The Lord of the Rings and The Hobbit and those who are going to read them.'
Sunday Times

'A story magnificently told, with every kind of colour and movement and greatness.'
New Statesman

'Masterpiece? Oh yes, I've no doubt about that.'
Evening Standard

J.R.R.Tolkien (1892-1973) was a distinguished academic, though he is best known for writing The Hobbit, The Lord of the Rings, The Silmarillion and The Children of Hurin, plus other stories and essays. His books have been translated into over 50 languages and have sold many millions of copies worldwide.