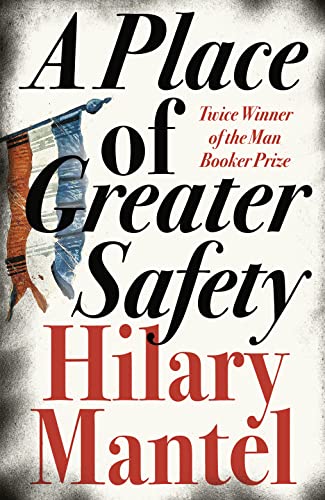 A Place of Greater Safety by Hilary Mantel

From the double Man Booker prize-winning author of Wolf Hall, Bring Up the Bodiesand The Mirror & the Light comes an extraordinary work of historical imagination - this is Hilary Mantel's epic novel of the French Revolution.

A Place of Greater Safety by Hilary Mantel

From the double Man Booker prize-winning author of Wolf Hall, Bring Up the Bodiesand The Mirror & the Light comes an extraordinary work of historical imagination - this is Hilary Mantel's epic novel of the French Revolution.

Georges-Jacques Danton: zealous, energetic and debt-ridden. Maximilien Robespierre: small, diligent and terrified of violence. And Camille Desmoulins: a genius of rhetoric, charming and handsome, yet also erratic and untrustworthy. As these young men, key figures of the French Revolution, taste the addictive delights of power, the darker side of the period's political ideals is unleashed - and all must face the horror that follows.

'One of the best English novels of the 20th century.' Diana Athill, The Oldie

'Hilary Mantel has soaked herself in the history of the period...and a striking picture emerges of the exhilaration, dynamic energy and stark horror of those fearful days.' Daily Telegraph

'I cannot think of a historical novel as good as this until one goes back to Marguerite Yourcenar's "Memoirs of Hadrian", published forty years ago.' Evening Standard

'Marvellous...It was the best of times; it was the worst of times. Hilary Mantel captures it all.' Time Out

'Intriguing...She has grasped what made these young revolutionaries - and with them the French Revolution - tick.' Independent

'An extraordinary and overwhelming novel...immensely detailed and yet fast-moving...she has set herself to capture the excitement and intellectual fervour of the period. She does it admirably...a tour de force.' Scotsman

'Much, much more than a historical novel, this is an addictive study of power, and the price that must be paid for it...a triumph.' Cosmopolitan

'This is a high-class historical blockbuster.' Red Magazine

Hilary Mantel is the author of fifteen books, including A PLACE OF GREATER SAFETY, BEYOND BLACK, the memoir GIVING UP THE GHOST, and the short-story collection THE ASSASSINATION OF MARGARET THATCHER. Her two most recent novels, WOLF HALL and its sequel BRING UP THE BODIES, have both been awarded the Man Booker Prize.

GOR001602615
9780007250554
000725055X
A Place of Greater Safety by Hilary Mantel
Hilary Mantel
Used - Very Good
Paperback
HarperCollins Publishers
2007-03-05
880
N/A
Book picture is for illustrative purposes only, actual binding, cover or edition may vary.
This is a used book - there is no escaping the fact it has been read by someone else and it will show signs of wear and previous use. Overall we expect it to be in very good condition, but if you are not entirely satisfied please get in touch with us
Trustpilot