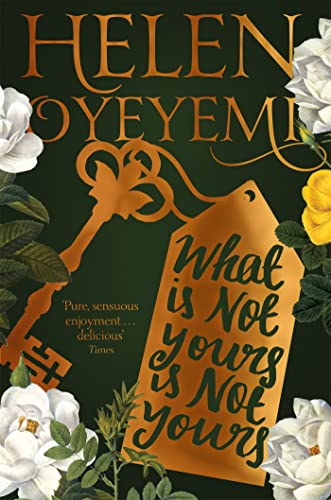 A remarkable collection of short stories from one of our most gifted writers, Helen Oyeyemi.

The stories collected in What Is Not Yours Is Not Yours are linked by more than the exquisitely winding prose of their creator: Helen Oyeyemi's ensemble cast of characters slip from the pages of their own stories only to surface in another.

The reader is invited into a world of lost libraries and locked gardens, of marshlands where the drowned dead live and a city where all the clocks have stopped; students hone their skills at puppet school, the Homely Wench Society commits a guerrilla book-swap, and lovers exchange books and roses on St Jordi's Day.

It is a collection of towering imagination, marked by baroque beauty and a deep sensuousness.

Oyeyemi's imagination is impressive and vast . . . Her ability to conceive her stories on such a grand scale is what makes her work so magnetic, sucking the reader into any number of netherworlds. Perhaps it's this ability to consume and be consumed that keeps Oyeyemi constantly, and prolifically, at work. * Guardian *
Transcendent . . . the pleasurable awareness of a story being told courses through the collection like electricity . . . Oyeyemi expertly melds the everyday, the fantastic and the eternal . . . with each story I had the delightful and rare experience of being utterly surprised . . . Oyeyemi has created a universe that dazzles and wounds * New York Times *

Alluring . . . the style and peculiar authority of this exceptional young writer will carry you carefully through the
labyrinth and into a new and exciting literary landscape . . . If you are seduced by magical realism - particularly the novels of Allende and Marquez - you will savour Oyeyemi's inventive tales.

* Daily Mail *
Wild, luscious and startling . . . Oyeyemi glides seamlessly across time, space and genre . . . Oyeyemi's observations are as sharp as they are humorous. But she is equally at home in a more lyrical mode, her writing warm and sensuous . . . these gorgeously baroque stories are full of humour, tenderness, wisdom and strange delights -- Rebecca Abrams * Financial Times *
Enchanting . . . the breadth of Oyeyemi's imagination is impressive, teetering, as ever, on the edge of magical realism. Her use of fairytales, folklore and ghost stories is distinctly reminiscent of the work ofAngela Carter . . . inviting, luscious prose. -- Lucy Scholes * Guardian *
Curious, erotic, by turns dark and humorous; like the many secrets these stories reveal, Helen Oyeyemi's imagination is ripe to be unlocked, revelled in and treasured. * Literary Review *
Ethereal beauty and unexpected humour * Independent on Sunday *
Boasts ambitious stories written masterfully by an adventurous author, and is another example of Oyeyemi's skill at finding inspiration in the smallest and most ephemeral details. * New York Times Live *
What Is Not Yours Is Not Yours illustrates the necessity and power of private, written confessions. * New Yorker *
This is a truly exceptional work of fiction, by a writer we should be delirious to have as a contemporary. -- Stuart Evers * Independent *
Oyeyemi's fireworks illuminate a world in which other people are always more mysterious and strange than we might think * Spectator *
[Oyeyemi] has come up with something unique, keeping pace with a modern mixed-up world * Daily Telegraph *
Oyeyemi takes the classic folk tale on a sometimes dark, often erotic, always fantastic, journey. The book itself is a thing of beauty, too. * Pool *
Oyeyemi captures the off-kilter fairy-tale magic of her 2014 masterwork, Boy, Snow, Bird . . . [she] writes with mastery, sometimes keeping her prose sparse and declarative only to unleash a bounty of description and humor a sentence later. * Entertainment Weekly *
Beautifully broken tales with wonderfully flawed characters . . . a fascinating glimpse into a world built on our fears, hopes and desires . . . articulating such disorder proves Oyeyemi as the painstakingly masterful writer that she is. * Stylist *
The best teller of fairy tales we've got . . . [Oyeyemi's] first collection of short stories is obviously a bit of a treat . . . allowing for more invention, more sexiness and more beautiful sentences that lead you round the corner to something surprising . . . brilliant * Emerald Street *
Witty and tender . . . simple and beautiful . . . hers is a rare talent -- Kate Clanchy * Guardian *
These short stories are pure, sensuous enjoyment, packed with colour and passion * Times *
A collection of short stories, which will suck the reader into Oyeyeymi's wild and surreal imagination. * Red Magazine *
Occasionally gothic, sometimes fantastical, always captivating. * Radio Times *
Oyeyemi has created a universe that dazzles and wounds. * Scotland on Sunday *
It is Oyeyemi's boundless inventiveness which drives these stories . . . stylistically bold, fantastical, disorientating and ruthlessly defying convention. Oyeyemi, one of the Granta Best of Young British Novelists 2013, now effortlessly outpaces most of her peers. In this short fiction we can discern hints of Angela Carter and hear notes of Aimee Bender but on the whole what rings out is Oyeyemi's singular, magical voice. * National *
Her arguments, about identity, about sexuality, are more fluid than [Angela] Carter's . . . Reading What Is Not Yours Is Not Yours is like settling into a rollercoaster: you must abandon yourself * New Statesman *
What is Not Yours is Not Yours is like a charmed set of Russian dolls: spellbound, we are gripped by the seamlessly joined stories unfolding from-and into-one another, as we wait for Oyeyemi to reach for her next bit of magic. * Londonist *
Dizzying, baffling, and beguiling . . . unruly in the best way, drawing on pre-modern modes of story-telling (fairy tales, Boccaccio, The Arabian Nights) to show they've lost none of their power in the present * Vulture *
Imaginative, playful and entirely unique, this collection of short stories is magical realism at its finest * Time Out (US) *
The stories in this collection are poetic and puzzling . . . get ready to tumble through the doors of this beautifully challenging and satisfying collection * NPR *
Helen Oyeyemi is the author of several highly acclaimed novels, including White is for Witching (which won a Somerset Maugham Award), Mr Fox and Boy, Snow, Bird. Helen has been included in Granta's Best Young British Novelists.
GOR008075477
9781447299394
1447299396
What Is Not Yours Is Not Yours by Helen Oyeyemi
Helen Oyeyemi
Used - Like New
Paperback
Pan Macmillan
2017-02-09
272
Long-listed for International Dylan Thomas Prize 2017 (UK)
Book picture is for illustrative purposes only, actual binding, cover or edition may vary.
The book has been read, but looks new. The book cover has no visible wear, and the dust jacket is included if applicable. No missing or damaged pages, no tears, possible very minimal creasing, no underlining or highlighting of text, and no writing in the margins
Trustpilot