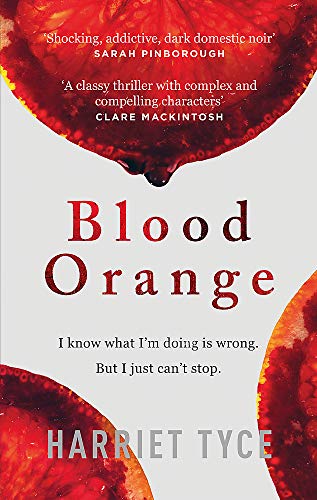 Alison’s life on the surface seems perfectly happy. She has a great career, a gorgeous daughter and a husband who adores her. However, not everything is as harmonious as it seems. Alison is depressed; she drinks to excess, is having a secret affair with a work colleague, and doesn’t invest the time in her family that they deserve.

Blood Orange: The page-turning thriller that will shock you by Harriet Tyce

When she is given a murder case to solve, it seems fairly straightforward. The client admits she killed her husband and wants to plead guilty. Despite this, there is something about her story that doesn’t quite add up. As Alison digs deeper and gets closer to the truth her own secrets and past come back to haunt her. She is threatened by someone who wants her to face up to what she has done and wants to make sure she loses everything as a consequence.
This addictive and chilling thriller will leave you on the edge of your seat, and unable to put it down until the very last page.
Blood Orange is an international bestseller, A Richard and Judy WHSmith Winter Book Club pick and has been shortlisted for prestigious awards including the Dead Good Reader Awards 2019, and the Amazon Publishing Readers’ Awards 2019 in both debut and audiobook.
You should read this book if…


Gripping * Daily Mail *
A smash hit * Best *
This thriller breathes new life into the domestic noir genre and grips until the final page * Daily Express *
A heart-pounding thriller . . . and deliciously twisty plot * Good Housekeeping *
A sizzlingly addictive read . . . its mysteries unfurl brilliantly to that often most elusive quality: a genuinely satisfying end. Five stars' -- Lisa Howells * Heat *
An addictive and unforgettable domestic noir, at once shocking, sharp and seriously twisted. It's the perfect book to binge read over the weekend * Culturefly *
Harriet Tyce brings a new layer of visceral, addictive dark to domestic noir. Obsession, revenge, lust and murder play out on the pages as a female barrister tries to hold her life together while her personality tries to tear it apart. At once shocking and riveting, I simply couldn't stop reading. Bravo -- Sarah Pinborough * Behind Her Eyes *
Blood Orange is destined to be the debut that everyone is talking about in 2019. Dark, original and utterly compelling, I could not put it down. And what a twist at the end! -- Lisa Jewell * Then She Was Gone *
A classy thriller with complex and compelling characters -- Clare Mackintosh * I See You *
Gritty and compelling, Blood Orange drags you right into the hearts of the flawed characters and their stories from the get go. A book that will keep you up all night -- Kate Hamer * The Girl in the Red Coat *
A dark and disturbing domestic noir -- Louise Jensen * The Sister *
Blood Orange kept me frantically turning the pages, desperate to know what would happen next. A superb, compulsive read! -- Tess Gerritsen * I Know a Secret *
This brilliant debut from Harriet Tyce has it all - a tricky murder case, a complex and conflicted female barrister battling her own demons, and layer upon layer of intrigue as Blood Orange flows towards its breath-taking ending. -- Rachel Abbott * Only the Innocent *
Combines sharp spare prose with a gloriously twisted plot - I read this in one heart-pounding, furiously angry sitting -- Emma Flint * Little Deaths *
The debut novel of the year. Harriet Tyce is now on my 'must read' list -- Jeff Abbott * The Sam Capra Series *
It was all brilliantly done. Writing, plotting, characters - wonderful and deeply satisfying, devour-in-one-sitting stuff!' -- Lucy Mangan * Bookworm: A Memoir of Childhood Reading *
We get it, every thriller going is "the new The Girl on the Train", but this one really does have you turning the pages in the same obsessive way ... It's not all about the twisty ending like some other thrillers. Instead it deals with issues faced by career women and the notion of "good" and "bad" in a way that will keep you thinking long after you've found out what happens. * Cosmopolitan *
Dark and compelling. * Mel McGrath *
I raced through Blood Orange by Harriet Tyce, which is oh-so-timely and had me gasping aloud at the final twist -- Hannah Beckerman
Dark, sophisticated and sexy, Blood Orange is a powerful debut in the vein of Apple Tree Yard, that had me gripped to its very last page. I couldn't recommend it more highly -- Elizabeth Fremantle * Queen's Gambit *
Tyce gives the domestic noir a timely update with this dark debut * iNews *
A dark and disturbing thriller - we were gripped * Closer *
I read this in one sitting and thoroughly, thoroughly enjoyed it. Would definitely recommend * Woman's Weekly *
This is essential reading for fans of Girl On The Train and Apple Tree Yard, and it is just as unpredictable and page-turningly good. It is as disturbing as it is gripping and not for the faint-hearted * Herald *
If The Girl On The Train gave you a taste for alcoholic female narrators grasping at their last chance to turn their lives around, you'll like Blood Orange, which I think is even better * Sunday Express *
Complex and menacing, this is a very impressive debut -- Alison Flood * Observer *
Blood Orange is glittering and fierce and resolutely unsentimental, a glorious bonfire of a marriage thriller * Irish Times *
We were gripped * Bella *
An addictive and unforgettable domestic noir, at once shocking, sharp and seriously twisted * Culturefly *
Fans of Apple Tree Yard and The Girl on the Train will love the atmosphere of clenched ambiguity Tyce sustains so well. -- John O'Connell * Guardian *
Blood Orange is dark and immensely readable. An impressive debut * The Times Saturday Review *
One of the best psychological thrillers I have read for a long time... This book truly has it all! 10 stars out of 10. * Peterborough Telegraph *
This gripping novel, an absolute page-turner with many twists and turns, had me hooked from start to finish . . . If I didn't have to rise early for work I would have finished Blood Orange in a single sitting. * RTE Guide *
A deftly plotted domestic noir thriller of the highest order with a shocking twist in the tail. Debut novelist Tyce is going places. * Irish Times Independent *
It is a terrific domestic noir that will be one of THE book club reads this year. * The Sun *
The way in which these two themes are entwined - Alison's humiliatingly sozzled, sex-mad life, and the case she is defending (rather well) - are deftly handled. There is a marvellous denouement * The Tablet *

Harriet Tyce grew up in Edinburgh and studied English at Oxford University before doing a law conversion course at City University. She practised as a criminal barrister in London for nearly a decade, and recently completed an MA in Creative Writing - Crime Fiction at the University of East Anglia. She lives in north London. Her first novel, Blood Orange, published in 2019 to huge critical acclaim. Lies You Told publishes summer 2020.
GOR009595692
9781472252753
1472252756
Blood Orange: The page-turning thriller that will shock you by Harriet Tyce
Harriet Tyce
Used - Very Good
Hardback
Headline Publishing Group
2019-02-21
336
N/A
Book picture is for illustrative purposes only, actual binding, cover or edition may vary.
This is a used book - there is no escaping the fact it has been read by someone else and it will show signs of wear and previous use. Overall we expect it to be in very good condition, but if you are not entirely satisfied please get in touch with us
Trustpilot