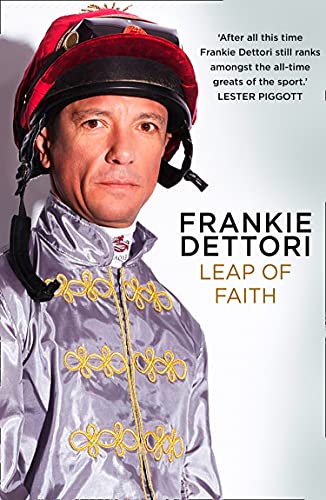 Leap of Faith by Frankie Dettori

Leap of Faith: The New Autobiography by Frankie Dettori

When Lanfranco 'Frankie' Dettori arrived on British shores in 1985, aged just 14, he couldn't speak a word of English. Having left school just a year earlier and following in the footsteps of his father, he was eager to become a stable boy and apprentice jockey, willing to do everything it took to make it. This was his first, but certainly not his last, leap of faith.

Despite his slight size, Frankie's impact upon the British racing scene was immediate and significant. Brimming with confidence, charisma and personality, and with what was clearly a precocious talent, in 1990 he became the first teenager since Lester Piggot to win over 100 races in a single season. By 1996, Frankie was already established as a celebrity in the sport and an adopted national treasure, but it was his extraordinary achievement of winning all seven races in a single day at Ascot that cemented his reputation as the greatest rider of his generation.

Nearly 25 years later, and having won the Longines World's Best Jockey for three consecutive years running, Frankie has demonstrated an unparalled level of longevity at the pinnacle of his sport. But his story is not simply one of uninterrupted success, but also of personal anguish, recovery and restoration - both in and out of the saddle.

Now, for the very first time, Frankie compellingly reveals the lows to his highs; the plane crash that nearly killed him, the drugs ban that nearly made him quit the sport, and the acrimonious split from Godolphin that threatened his future. But Leap of Faith is also a story of love - for the sport he continues to dominate to this day, the great horses of his era (Stradivarius, Golden Horn, and of course Enable), and most importantly for his family, who have supported him every step of the way.

Heartfelt and poignant, this is not simply a memoir, but a celebration of perseverance and defying the odds.

Frankie Dettori was born in Milan. He was sent to Newmarket at the age of 16 by his father, Lanfranco, a former Italian champion jockey, where he worked as a bookie before being taken up by the trainer Luca Cumani. In 1990 he became the first teenager since Lester Piggott to ride 100 winners in a season, and is famously known for his extraordinary achievement of winning all seven races in a single day at Ascot in 1996. Nearly 25 years later, Frankie is still at the top of his game, having won the Longines World's Best Jockey for three consecutive years running. Frankie, his wife Catherine and their four young children divide their time between Newmarket and their extended family in Sardinia.

NGR9780008465469
9780008465469
0008465460
Leap of Faith: The New Autobiography by Frankie Dettori
Frankie Dettori
New
Hardback
HarperCollins Publishers
2021-10-28
320
N/A
Book picture is for illustrative purposes only, actual binding, cover or edition may vary.
This is a new book - be the first to read this copy. With untouched pages and a perfect binding, your brand new copy is ready to be opened for the first time
Trustpilot