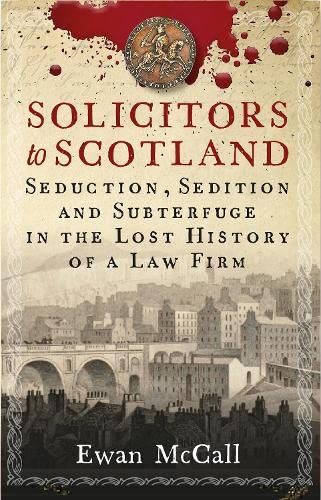 Solicitors to Scotland by Ewan McCall

This book charts the history of Scotland's unique legal system from medieval times to the digital age, including previously unknown material from Adam Smith, the Court of Charles II, Jacobite warships, the East India Company, Sir Walter Scott and others.

Solicitors to Scotland: Seduction, Sedition and Subterfuge in the Lost History of a Law Firm by Ewan McCall

Three huge iron chests lay locked in the office of a law firm, their ancient mechanisms jealously guarding secrets of Scotland's past. No one had seen inside the chests for over a century or knew what they contained. When the bolts were finally opened, the artefacts contained in these chests revealed more than anyone had expected.

From early monasteries to the digital age, from Robert the Bruce to Adam Smith, from Jacobite search warrants to twins switched at birth, the lost material from these archives has enabled us to reconstruct the lives and times of some of the most romantic, bizarre, heroic and villainous characters to brush shoulders with the law. Their stories reveal very human expressions of the inner conflicts of Empire, Enlightenment, industrialisation and democratisation.

No profession is better placed than the law to track the trials and tribulations of social change, nor is any so closely involved with the outcome of disputes in which people grapple with their own loyalties, sensibilities and sexualities. Pivoting between popes, plots, prime ministers and prime suspects, this kaleidoscopic tour of Scotland's past may change our perception of the present.

Ewan McCall is a writer and campaigner specialising in the Scottish Enlightenment and the East India Company. He started writing Solicitors to Scotland after accidentally stumbling across eighteenth-century ledgers while helping to clear office space at Anderson Strathern. Since then, he has served as British Young Ambassador to Europe and works in advocating anti-poverty initiatives.

Anderson Strathern, the law firm in which the three ancient chests were found, takes its name from the union of two historical Scottish legal firms that merged in 1992. However, the story of the company begins with its first verifiable partner, John Lumsden, admitted a WS in 1701. Today, the firm works with public and private clients across Scotland.

NGR9781839830259
9781839830259
1839830255
Solicitors to Scotland: Seduction, Sedition and Subterfuge in the Lost History of a Law Firm by Ewan McCall
Ewan McCall
New
Paperback
Birlinn General
2022-06-02
208
N/A
Book picture is for illustrative purposes only, actual binding, cover or edition may vary.
This is a new book - be the first to read this copy. With untouched pages and a perfect binding, your brand new copy is ready to be opened for the first time
Trustpilot