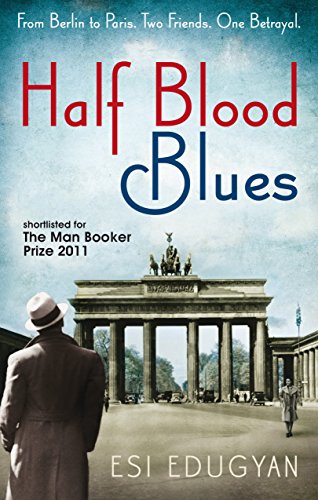 Half Blood Blues by Esi Edugyan

The aftermath of the fall of Paris, 1940. Hieronymous Falk, a rising star on the cabaret scene, was arrested in a cafe and never heard from again. He was twenty years old. He was a German citizen. And he was black. Fifty years later, Sid, Hiero's bandmate and the only witness that day, is going back to Berlin.

Half Blood Blues: Shortlisted for the Man Booker Prize 2011 by Esi Edugyan

The aftermath of the fall of Paris, 1940. Hieronymus Falk, a rising star on the cabaret scene, is arrested in a cafe and never heard from again. He is twenty years old. A German citizen. And he is black. Fifty years later, Sid, Hiero's bandmate and the only witness that day, is going back to Berlin. Persuaded by his old friend Chip, Sid discovers there's more to the journey than he thought when Chip shares a mysterious letter, bringing to the surface secrets buried since Hiero's fate was settled. In Half Blood Blues, Esi Edugyan weaves the horror of betrayal, the burden of loyalty and the possibility that, if you don't tell your story, someone else might tell it for you. And they just might tell it wrong ...
A superbly atmospheric prologue kick-starts a thrilling story about truth and betrayal... [a] brilliant, fast-moving novel. -- Kate Saunders * Times *
Assured, vivid and persuasive... Impressively evocative of period and place, and an effortlessly involving and dramatically unusual second novel. -- Sharon O'Connell * Time Out *
Simply stunning, one of the freshest pieces of fiction I've read. A story I'd never heard before, told in a way I'd never seen before. I felt the whole time I was reading it like I was being let in on something, the story of a legend deconstructed. It's a world of characters so realized that I found myself at one point looking up Hieronymus Falk on Wikipedia, disbelieving he was the product of one woman's imagination -- Attica Locke
Edugyan really can write... redemptive -- Bernadine Evaristo * Guardian *
Mesmerising... Edugyan has a perfect ear for conversations and the confusions of human love and jealousy... moving... A remarkable novel. * Morning Star *
Ingenious... -- Anthony Cummins * Daily Telegraph *
A mature, moving second novel was very deservedly shortlisted for the Man Booker Prize this week... Half Blood Blues shines with knowledge, emotional insight, and historical revisionism, yet it never becomes over-burdened by its research. The novel is truly extraordinary in its evocation of time and place, its shimmering jazz vernacular, its pitch-perfect male banter and its period slang. Edugyan never stumbles with her storytelling, not over one sentence. -- Arifa Akbar * Independent *
This is a wonderful, vibrant, tense novel about war and its aftermath. Its author has brought both the wartime past of a devastated city and its confident reinvention of itself in a new era to life with extraordinary assurance. -- Susan Hill * Man Booker Prize judge *
Half Blood Blues shines with knowledge, emotional insight, and historical revisionism, yet it never becomes overburdened by its research. The novel is truly extraordinary in its evocation of time and places, its shimmering jazz vernacular, its pitch-perfect male banter and its period slang. * Canberra Times, Australia *
Sid's voice... is a triumph of vernacular writing and convincingly captures the mood of the late jazz age in Europe... punchy and atmospheric. -- Edmund Gordon * Sunday Times *
Powerful and effortlessly written * Pride *
A densely researched tale musing on timeless themes of jealousy and betrayal. -- Hephzibah Anderson * Daily Mail *
A story so rich in texture, so deeply felt and imagined, that from the first, savoury sentences, you're hooked... Taught, evocative and utterly convincing. -- Tim Heald * The Lady *
Edugyan's ventriloquism is a compelling, personal and authentic, her story deeply researched -- Robert McCrum * Observer *
A moving, lyrical exploration of the plight of mixed-race immigrants rendered stateless by the Second World War -- Emma Hughes * Country Life *
A great and original novel... tense, richly humorous and enjoyable [On the audio book edition] -- Sue Gaisford * Independent on Sunday *
Ingenious - and the hip period slang is pitch-perfect. [On the audio book edition] -- Sue Arnold * Guardian *
The novel is held together by Edugyan's masterly wielding of the narrative voice - a voice so constant and commanding in its articulation, so firm and assured in its rhythms, that the splintered story takes on its own enchanting rhythm... enthralling... a captivating novel of music, memory and storytelling. -- Charlotte Ryland * TLS *
Evocative, articulate, and with a melancholy rhythm that will tease the jazz out of any reader's soul, Half Blood Blues is a masterpiece of storytelling and humanity * Cape Times *
Triumphant... a zany, original, sad, funny, eccentric, wild novel that is a constant and refreshing surprise... The novel resounds with the sound of jazz. It is a tense, nervy book, about betrayal and regret, a crime novel about male bonding and ambition. It shows that women can write about men as well as men can - and why not? -- Susan Hill * Mslexia *
A memorable evocation of the defiant thrill of jazz at a terrible time. * Kirkus *
Esi Edugyan has degrees from the University of Victoria and Johns Hopkins University. Her work has appeared in several anthologies, including Best New American Voices 2003. Her debut novel, written when she was 25, The Second Life of Samuel Tyne, was published internationally. She currently lives in Victoria, British Columbia. www.esiedugyan.com
GOR010458174
9781846687754
1846687756
Half Blood Blues: Shortlisted for the Man Booker Prize 2011 by Esi Edugyan
Esi Edugyan
Used - Like New
Paperback
Profile Books Ltd
2011-06-02
352
Winner of Scotiabank Giller Prize 2011 (UK) Winner of Anisfield-Wolf Book Award 2012 (UK) Winner of Ethel Wilson Fiction Prize 2012 (UK) Winner of Hurston/Wright Legacy Award for fiction 2013 (UK) Short-listed for Booker Prize for Fiction 2011 (UK) Short-listed for Rogers Writers' Trust Fiction Prize 2011 (UK) Short-listed for Governor General's Literary Award: Fiction Category 2011 (UK) Short-listed for Walter Scott Prize for Historical Fiction 2012 (UK) Short-listed for Orange Prize 2012 (UK) Long-listed for IMPAC Dublin Literary Award 2013 (UK)
Book picture is for illustrative purposes only, actual binding, cover or edition may vary.
The book has been read, but looks new. The book cover has no visible wear, and the dust jacket is included if applicable. No missing or damaged pages, no tears, possible very minimal creasing, no underlining or highlighting of text, and no writing in the margins
Trustpilot