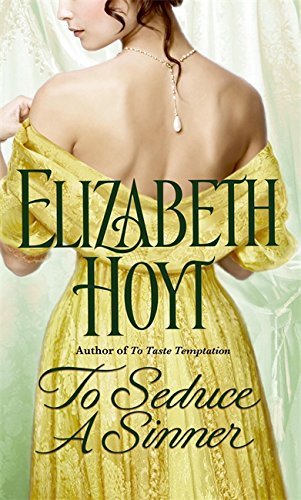 To Seduce A Sinner by Elizabeth Hoyt

To Seduce A Sinner: Number 2 in series by Elizabeth Hoyt

Jasper Renshaw, Viscount Vale, has a problem: he needs to marry and produce an heir to the title. All Jasper wants is to find a lady who will put up with him long enough to wed so he can return to his customary life of drinking and womanizing. Melisande Fleming, on the other hand, has been secretly in love with Jasper for years. Knowing that Jasper is under pressure to marry, Melisande grasps her fate with both hands and volunteers to wed him, even though she means nothing to him.
Although Jasper is initially only interested in producing an heir, their wedding night is pleasant, if not earth-shattering and he oddly enough finds himself curious about his wife. What does Melisande do all day? What does she think about? Melisande, however, has everything she told herself she'd be content with: marriage to the man she loves. But to her chagrin, she wants more from the Jasper. More of his time, more of his thoughts and heart, and really, while we're on the subject, more lovemaking. Thus, she sets out to seduce her husband by night even as he starts turning up in her life during the day.

There's enchantment in Hoyt's stories that makes you believe in the magic of lover * Romantic TIMES BOOKreviews MAGAZINE *
Elizabeth Hoyt lives in central Illinois with three untrained dogs, two angelic, but bickering children, and one long-suffering husband
GOR011369811
9780446406925
B001PF7HFU
To Seduce A Sinner: Number 2 in series by Elizabeth Hoyt
Elizabeth Hoyt
Legend of the Four Soldiers
Used - Very Good
Paperback
Little, Brown & Company
20081204
384
Commended for Rita Awards (Historical) 2009 null null null null null null null null null
Book picture is for illustrative purposes only, actual binding, cover or edition may vary.
This is a used book - there is no escaping the fact it has been read by someone else and it will show signs of wear and previous use. Overall we expect it to be in very good condition, but if you are not entirely satisfied please get in touch with us
Trustpilot