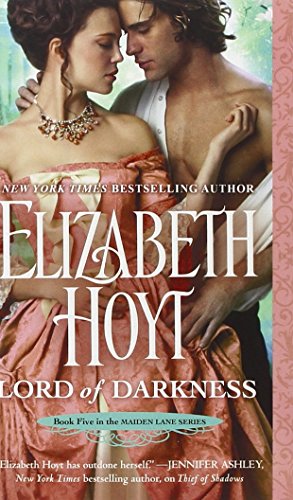 Lord of Darkness by Elizabeth Hoyt

He lives in the shadows. As the mysterious masked avenger known as the Ghost of St. Giles, Godric St. John's only goal is to protect the innocent of London. Until the night he confronts a fearless young lady pointing a pistol at his headNand realizes she is his wife. Original.

Lord of Darkness by Elizabeth Hoyt

WHEN STRANGERS IN THE NIGHT

He lives in the shadows. As the mysterious masked avenger known as the Ghost of St. Giles, Godric St. John's only goal is to protect the innocent of London. Until the night he confronts a fearless young lady pointing a pistol at his head-and realizes she is his wife . . .

Lady Margaret Reading has vowed to kill the Ghost of St. Giles-the man who murdered her one true love. Returning to London, and to the man she hasn't seen since their wedding day, Margaret does not recognize the man behind the mask. Fierce, commanding, and dangerous, the notorious Ghost of St. Giles is everything she feared he would be-and so much more . . .

DESIRE IS THE ULTIMATE DANGER

When passion flares, these two intimate strangers can't keep from revealing more of themselves than they had ever planned. But when Margaret learns the truth-that the Ghost is her husband-the game is up and the players must surrender . . . to the temptation that could destroy them both.

"Lord of Darkness...illuminates Hoyt's boundless imagination... readers will adore this story."--RT Book Reviews
"Hoyt's writing is imbued with great depth of emotion ...Heartbreaking ... an edgy tension-filled plot."--Publishers Weekly
"I adore the Maiden Lane series, and this fifth book is a very welcome addition to the series . . . [It's] sexy and sweet all at the same time . . . This can be read as a standalone, but I adore each book in this series and encourage you to start from the beginning."--USA Today's Happy Ever After Blog
"Lord of Darkness is classic Elizabeth Hoyt, meaning it's unique, engaging, and leaves readers on the edge of their seats, waiting for the next book . . . an incredible addition to the fantastic Maiden Lane series. I Joyfully Recommend Godric and Megs's tale, for it's an amazing, well-crafted story with an intriguing plot and a lovely, touching romance that I want to enjoy again and again and again . . . simply enchanting!"--JoyfullyReviewed.com
"Beautifully written . . . a truly fine piece of storytelling and a novel that deserves to be read and enjoyed."--TheBookBinge.com
Elizabeth Hoyt is the New York Times bestselling author of over seventeen lush historical romances including the Maiden Lane series. Publishers Weekly has called her writing "mesmerizing." She also pens deliciously fun contemporary romances under the name Julia Harper. Elizabeth lives in Minneapolis, Minnesota, with three untrained dogs, a garden in constant need of weeding, and the long-suffering Mr. Hoyt.

The winters in Minnesota have been known to be long and cold and Elizabeth is always thrilled to receive reader mail. You can write to her at: P.O. Box 19495, Minneapolis, MN 55419 or email her at: Elizabeth@ElizabethHoyt.com.

GOR008031263
9781455508303
1455508306
Lord of Darkness by Elizabeth Hoyt
Elizabeth Hoyt
Used - Well Read
Paperback
Little, Brown & Company
2013-02-26
384
N/A
Book picture is for illustrative purposes only, actual binding, cover or edition may vary.
This is a used book. We do our best to provide good quality books for you to read, but there is no escaping the fact that it has been owned and read by someone else previously. Therefore it will show signs of wear and may be an ex library book
Trustpilot