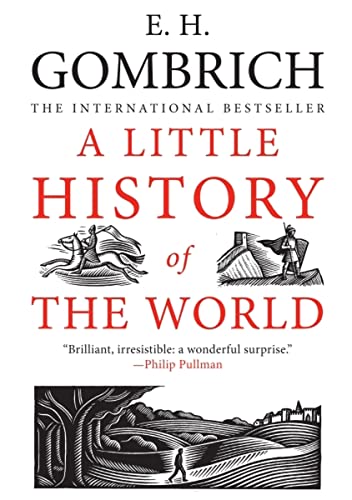 A Little History of the World by E. H. Gombrich

The international bestseller available in English for the first time: E. H. Gombrich's world history for the curious of all ages...

A Little History of the World by E. H. Gombrich

The international bestseller: E. H. Gombrich's sweeping history of the world, for the curious of all ages

"All stories begin with 'Once upon a time.' And that's just what this story is all about: what happened, once upon a time." So begins A Little History of the World, an engaging and lively book written for readers both young and old. Rather than focusing on dry facts and dates, E. H. Gombrich vividly brings the full span of human experience on Earth to life, from the stone age to the atomic age. He paints a colorful picture of wars and conquests; of grand works of art; of the advances and limitations of science; of remarkable people and remarkable events, from Confucius to Catherine the Great to Winston Churchill, and from the invention of art to the destruction of the Berlin Wall.

For adults seeking a single-volume overview of world history, for students in search of a quick refresher course, or for families to read and learn from together, Gombrich's Little History enchants and educates.

"In simple, vivid prose, Gombrich surveys the human past from pre-history to his own time. . . . Lucky children will have this book read to them. Intelligent adults will read it for themselves and regain contact with the spirit of European humanism at its best."-Anthony Grafton, Wall Street Journal

". . . a marvellous antidote to history without chronology: the whole experience of human history, from prehistory to the Second World War, compressed into a flowing narrative. . . . [Gombrich] excels in creating a sense of the continuities of history - the ways in which human nature has not budged over the millennium, and the smallness of the differences between people. A delight."-Daily Telegraph

"Gombrich knows precisely how to converse with his audience, intelligent children between nine and thirteen. He uses powerful imagery to convey the sheer length of time that separates us from the dinosaurs."-Andrew Roberts, FT Magazine

"Gombrich opens with the most magical definition of history I have ever read . . . Tolerance, reason and humanity . . . suffuse every page of the Little History."-Amanda Vickery, Guardian Review

"The book is intellectually valuable, and unusual; rather than breaking history into eras or artificial categories. . . . Gombrich contextualizes them all and gives the vast unfolding of the Western world one wise, simple narrative. . . . For adults, it is full of delightful reminders as well as forgotten or never-known tidbits. As for younger readers . . . [the book] is a treasure for them."-Katie Haegele, Philadelphia Inquirer

"This is an unusual work for Yale: a children's history originally published 70 years ago. But it is a work one can quickly come to love. . . . Using vivid imagery, storytelling and sly humor, [Gombrich] brings history to life in a way that adults as well as children can appreciate. The book displays a breadth of knowledge."-Publishers Weekly (starred review)

"The true fairy tale of the evolution of mankind."-Die Zeit

"A panoramic overview of history from the Stone Age to the 1990s that . . . manages to be entertaining and informative. . . . Gombrich, in other words, is a born teacher whose humanistic values are implicit in every word he wrote. . . . It has taken almost 70 years to reach English-speaking readers. It has been worth the wait: expertly translated, elegantly produced and charmingly illustrated by Clifford Harper, it will enchant any child."-Joel Greenberg, The Australian

". . . an engrossing kaleidoscopic account of global history from the ancient Egyptians to the Treaty of Versailles."-Tristram Hunt, BBC History Magazine

". . . this book . . . has been called 'the true fairytale of the evolution of mankind.' I would happily go along with that and intend to give a copy as a stocking present to a favourite Godchild of mine."-Richard Edmonds, Birmingham Post

". . . the book charms, amuses and informs superbly . . . In A Little History, Gombrich proves he is as much a story teller as a professor."-Andrew Roberts, Daily Express

". . . this Little Book . . . is a thing of ripping yarns told at a rattling pace. Seventy years too late, I wish that the first edition had been available to me to read as often and over as many years as The Wind in the Willows, a book that grew in depth as I grew older. . . . Had I a dozen grandchildren (of any age) I'd order two dozen copies, one for the children, the other for their parents. Do not, from its title, underestimate this book."-Brian Sewell, Evening Standard

". . . another charming work of history for children which is shortly to be published by Yale and first appeared in 1935. . . . It's as fresh now as it was then. If I were Ruth Kelly, the Education Secretary, I'd order a copy for myself. Then I'd make it prescribed reading for every primary school in the country."-Melanie McDonagh, Evening Standard

"Christmas gift of the year is surely . . . A Little History of the World. This is a magical work for children. . . . Perfect for bedtime reading."-John Banville, Irish Times

"It is a joy to read, not merely because of his effortless mastery of global history, but also because he clearly was an enchanting man."-Kevin Myers, Irish Times

"The publishers tell us that Phillip Pullman found it irresistable. So it is . . . It certainly couldn't be done more agreeably . . . a perfect birthday present for a child with an enquiring mind. I wish it had been available when I was young."-Allan Massie, Literary Review

". . . the main body of the book retains an irresistible, boyish energy and enthusiasm. . . . Here, in this little book are answers to many of the questions you never dared to ask."-Margaret Drabble, New Statesman

"The Little History grips the reader with its vivid accounts of ordinary people and world-shaking events. As in all of his extraordinary works, Gombrich illuminates the present day with his human and fascinating insights into the past."-RA Magazine

". . . ostensibly a book for children, designed to present a chronology of world history, but it's a delight for all ages. The pages sparkle with the learned author's wit and wisdom - and reading them, one feels as if Gombrich, one of the greatest ever art historians, is guiding one through time with a grandfatherly gleam in his eye."-Ben Schott, The Observer

"A Little History reveals the seasoned humanity of its author's mind, as well as the knowledge archivally stored in it. Gombrich remains a tribal elder, he is, if Leonie consents to share him, everybody's grandfather."-Peter Conrad, The Observer

"A chewy read for the 21st century teenager, this Little History supplies a humane, and sweeping, guide to Man's achievements from the caves to the Paris Commune."-Robert McCrum, The Observer

"Rather than giving your child a book about Santa, try this. I think this is an essential read for any ten-year-old . . . it presents a very important message for children about striving towards a more tolerant and humanistic society."-The Scotsman


Named a Favorite Book of 2005 by the Los Angeles Times


"A brilliant piece of narrative, splendidly organised, told with an energy and confidence that are enormously attractive, and suffused with all the humanity and generosity of spirit that Gombrich's thousands of admirers came to cherish during his long and richly productive life. It's a wonderful surprise: irresistible, in fact."-Philip Pullman


"Imagine the full story of human habitation on our planet being told in such flowing prose that you want to read it out loud. If you can't imagine that, read A Little History of the World and experience it!"-Patricia S. Schroeder, President and CEO of the Association of American Publishers and Former U.S. Representative from Colorado

Among E. H. Gombrich's many writings are the international bestsellers The Story of Art and Art and Illusion. He was director of the Warburg Institute of the University of London from 1959 to 1976.

GOR001286639
9780300143324
030014332X
A Little History of the World by E. H. Gombrich
E. H. Gombrich
Little Histories
Used - Very Good
Paperback
Yale University Press
2008-08-19
304
N/A
Book picture is for illustrative purposes only, actual binding, cover or edition may vary.
This is a used book - there is no escaping the fact it has been read by someone else and it will show signs of wear and previous use. Overall we expect it to be in very good condition, but if you are not entirely satisfied please get in touch with us
Trustpilot