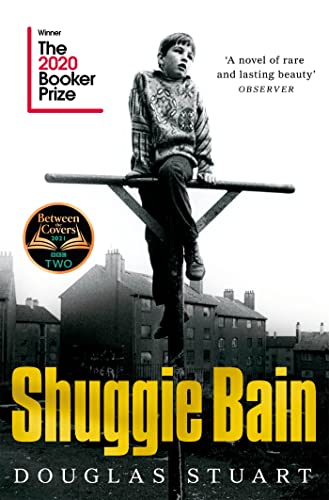 A heart-wrenchingly moving first novel set in Glasgow during the Thatcher years, Shuggie Bain tells the story of a boy's doomed attempt to save his proud, alcoholic mother from her addiction.

Shuggie Bain: Winner of the Booker Prize 2020 by Douglas Stuart

'We were bowled over by this first novel, which creates an amazingly intimate, compassionate, gripping portrait of addiction, courage and love.' The judges of the Booker Prize

'Douglas Stuart has written a first novel of rare and lasting beauty.' - Observer

It is 1981. Glasgow is dying and good families must grift to survive. Agnes Bain has always expected more from life. She dreams of greater things: a house with its own front door and a life bought and paid for outright (like her perfect, but false, teeth). But Agnes is abandoned by her philandering husband, and soon she and her three children find themselves trapped in a decimated mining town. As she descends deeper into drink, the children try their best to save her, yet one by one they must abandon her to save themselves. It is her son Shuggie who holds out hope the longest.

Shuggie is different. Fastidious and fussy, he shares his mother's sense of snobbish propriety. The miners' children pick on him and adults condemn him as no' right. But Shuggie believes that if he tries his hardest, he can be normal like the other boys and help his mother escape this hopeless place.

Douglas Stuart's Shuggie Bain lays bare the ruthlessness of poverty, the limits of love, and the hollowness of pride. A counterpart to the privileged Thatcher-era London of Alan Hollinghurst's The Line of Beauty, it also recalls the work of Edouard Louis, Frank McCourt, and Hanya Yanagihara, a blistering debut by a brilliant writer with a powerful and important story to tell.

A heartbreaking novel, a book both beautiful and brutal . . . All that grief and sadness and misery has been turned into something tough, tender and beautifully sad. * The Times *
Leaves us gutted and marvelling: Life may be short, but it takes forever. * New York Times *
I think it's the best first book I've read in many years. -- Karl Ove Knausgard * Guardian *
Rarely does a debut novel establish its world with such sure-footedness, and Stuart's prose is lithe, lyrical and full of revelatory descriptive insights. -- Alex Preston * Observer *
An astonishing portrait, drawn from life, of a society left to die . . . Shuggie Bain has been longlisted for the Booker Prize. In a just world, it would win. * Daily Telegraph *
Shuggie Bain comes from a deep understanding of the relationship between a child and a substance-abusing parent, showing a world rarely portrayed in literary fiction . . . Admirable and important. -- Sarah Moss * Guardian *
This is a dysfunctional love story . . . between a boy and his mother . . . what makes his book a worthy contender for the Booker is his portrayal of their bond, together with all its perpetual damage. * Financial Times *
Douglas Stuart's startling Glasgow-set debut novel creates a world of poverty and suffering offset by pure, heart-filling, love . . . It's a novel that deserves, and will surely often get, a second reading. -- Allan Massie * Scotsman *
Shuggie Bain is a novel that aims for the heart and finds it. -- John Self * The Times *
Tender and unsentimental . . . and the Billy Elliot-ish character of Shuggie . . . leaps off the page. * Daily Mail *
Beautiful and bleak but with enough warmth and optimism to carry the reader through. -- Graham Norton (via Twitter)
A boy's heartbreaking love for his mother . . . as intense and excruciating to read as any novel I have ever held in my hand . . . The book's evocative power arises out of the author's talent for conjuring a place, a time, and the texture of emotion . . . brilliantly written. * Newsday *
An outstanding book . . . Magnificently done . . . Wonderful. -- Lee Child * Sunday Post *
A debut novel that reads like a masterpiece, Shuggie Bain gives voice to the kind of helpless, hopeless love that children can feel toward broken parents. * Washington Post *
This heartfelt and harrowing debut novel - which has been compared to the work of Edouard Louis, Frank McCourt, and Hanya Yanagihara, and which Kirkus has already called a masterpiece . . . is rightly being heralded for its visceral, emotionally nuanced portrayal of working class Scottish life and its blazingly intimate exploration of a mother-son relationship. * LitHub *
A formidable story, lyrically told, about intimacy, family, and love. -- 12 Best Books of 2020 So Far * ELLE (US) *
The way Irvine Welsh's Trainspotting carved a permanent place in our heads and hearts for the junkies of late-1980s Edinburgh, the language, imagery, and story of fashion designer Stuart's debut novel apotheosizes the life of the Bain family of Glasgow... Readers may get through the whole novel without breaking down-then read the first sentence of the acknowledgements and lose it. The emotional truth embodied here will crack you open. You will never forget Shuggie Bain. Scene by scene, this book is a masterpiece. -- Kirkus Reviews starred review
A rare and haunting ode to 1980s Glasgow and its struggling communities, Shuggie Bain tells the story of a collapsing family that is lashed together by love alone. Douglas Stuart writes with startling, searing intimacy. I fell hard for these characters; when they have nothing left, they cling maddeningly-irresistibly-to humor, pride and hope * Chia-Chia Lin *
Shuggie Bain is an intimate and frighteningly acute exploration of a mother-son relationship and a masterful portrait of alcoholism in Scottish working class life, rendered with old-school lyrical realism . . . I kept being reminded of Joyce's Dubliners. -- Sandra Newman, author of The Heavens
There's no way to fake the life experience that forms the bedrock of Douglas Stuart's wonderful Shuggie Bain. No way to fake the talent either. Shuggie will knock you sideways * Richard Russo *
A dark shining work. Raw, formidable, bursting with tenderness and frailty. The effect is remarkable, it will make you cry. -- Karl Geary, author of Montpelier Parade
Every now and then a novel comes along that feels necessary and inevitable. I'll never forget Shuggie and Agnes or the incredibly detailed Glasgow they inhabit. This is the rare contemporary novel that reads like an instant classic. I'll be thinking and talking about Shuggie Bain - and teaching it - for quite some time. -- Garrard Conley, New York Times-bestselling author of Boy Erased
Glasgow, Scotland, in the 1980s is the backdrop for this story of the fraught bond between a young boy and his mother. -- 'The 22 Best Books to Read This Winter' * Vogue (US) *
Compulsively readable... As [the novel] beautifully and shockingly illustrates how Shuggie ends up alone, this novel offers a testament to the indomitable human spirit. Very highly recommended -- Library Journal starred review
Douglas Stuart was born and raised in Glasgow. After graduating from the Royal College of Art, he moved to New York, where he began a career in fashion design. Shuggie Bain, his first novel, won the Booker Prize and the Sue Kaufman Prize of the American Academy of Arts and Letters and was shortlisted for the National Book Award for Fiction, the Kirkus Prize and the Center for Fiction First Novel Prize. His short stories have appeared in the New Yorker and his essay on Gender, Anxiety and Class was published by Lit Hub. He lives in New York.
GOR011311222
9781529019292
152901929X
Shuggie Bain: Winner of the Booker Prize 2020 by Douglas Stuart
Douglas Stuart
Used - Like New
Paperback
Pan Macmillan
20210415
448
Winner of The Booker Prize 2020 (UK) null null null null null null null null null
Book picture is for illustrative purposes only, actual binding, cover or edition may vary.
The book has been read, but looks new. The book cover has no visible wear, and the dust jacket is included if applicable. No missing or damaged pages, no tears, possible very minimal creasing, no underlining or highlighting of text, and no writing in the margins
Trustpilot