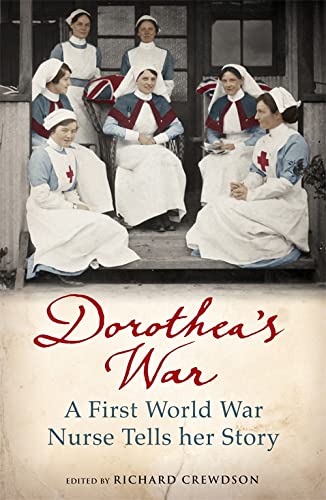 The evocative diaries of a young nurse stationed in northern France during the First World War, published for the first time. A rare insight into the great war for fans of CALL THE MIDWIFE.

The evocative diaries of a young nurse stationed in northern France during the First World War, published for the first time. A rare insight into the great war for fans of CALL THE MIDWIFE.

In April 1915, Dorothea Crewdson, a newly trained Red Cross nurse, and her best friend Christie, received instructions to leave for Le Treport in northern France. Filled with excitement at the prospect of her first paid job, Dorothea began writing a diary. 'Who knows how long we shall really be out here? Seems a good chance from all reports of the campaigns being ended before winter but all is uncertain.'

Dorothea would go on to witness and record some of the worst tragedy of the First World War at first hand, though somehow always maintaining her optimism, curiosity and high spirits throughout. The pages of her diaries sparkle with warmth and humour as she describes the day-to-day realities and frustrations of nursing near the frontline of the battlefields, or the pleasure of a beautiful sunset, or a trip 'joy-riding' in the French countryside on one of her precious days off. One day she might be gossiping about her fellow nurses, or confessing to writing her diary while on shift on the ward, or illustrating the scene of the tents collapsing around them on a windy night in one of her vivid sketches. In another entry she describes picking shells out of the beds on the ward after a terrifying air raid (winning a medal for her bravery in the process).

Nearly a hundred years on, what shines out above all from the pages of these extraordinarily evocative diaries is a courageous, spirited, compassionate young woman, whose story is made all the more poignant by her tragically premature death at the end of the war just before she was due to return home.

These warm, charming diaries of a young nurse, who witnessed scenes no one should ever have to see, are a remarkable testament to the resilience of the human spirit in the face of tragedy and savagery. * CHOICE *
This is a book of real charm and magnetism, enchantingly illustrated with Dorothea's tiny sketches... Dorothea describes her world with compassion, humour and a very sharp eye -- Victoria Clark * THE LADY *
a rare insight into the conflict that engulfed Europe from 1914 to 1918... [Crewdson] witnessed extraordinary events but her diaries sing with vibrant optimism and high-spirited observations, interspersed with charming illustrations... her impressions are compelling and these diaries enchant * THE FIELD *
a vivid account of the juxtapositions of war: long walks in the countryside, the hospitality of French farming families, flirting with the doctors, the icy blasts of winter in a bell tent where the nurses lived and which could blow away in a gale. And all the time an endless stream of convoys brought the wounded from the trenches a few miles away - from which the noise of gunfire and exploding shells echoed as a daily background to the work of the hospital... a fine addition to the growing literature on the multi-faceted experiences of the First World War -- Juliet Gardiner * THE TIMES *
an incredible insight into the working life of a nurse who 'patched up' the men who passed through the hospitals on their way to convalesce in 'good old Blighty' * YOUR FAMILY TREE *
In a similar vein to Vera Britten's Testament of Youth, chronicling the realities of war and military hospital life, this offers an insight into the battlefield, medicine and society. Most surprising is the calm approach that Dorothea brings to her work, her consistent good spirits and simple pleasures derived from a good meal or a trip into the French countryside * DISCOVERING BRITAIN *
the frank, moving diaries of a nurse who would witness and record some of the most horrific passages of the war and, tragically, would die just before she was about to return home from the battlefield * CHOICE *
The pages of [Dorothea Crewdson's] diary offer a rare glimpse of the incredible work of a nurse in this conflict and the view of the war from a female perspective * BRITAIN AT WAR *
Richard Crewdson has discovered a seam of gold for family historians: a continuous narrative by an ancestor who was involved in historic events... In this diary Dorothea describes four years of nursing with a spirited, gossipy tone, interspersed with weeks of fatigue and genuine danger...charming but harrowing * WHO DO YOU THINK YOU ARE? magazine *
The single voice of a young nurse in World War I rings poignantly from the pages of this diary...Her bright, warm personality shines through as we read first-hand of her life employed in military hospitals and revel in the hand-drawn illustrations that punctuated her diary...This is an incredible legacy not only for her family but for all those with an interest in the work of women in World War I and her original diaries have now been donated to the Imperial War Museum * FAMILY TREE MAGAZINE *
Dorothea Crewdson spent nearly four years nursing in France during the First World War, her vibrant, effervescent diaries happily having come to light courtesy of her nephew...are a sparkling and intimate chronicle that manage to chart life's many challenges without ever losing any native optimism...her account of wartime life, enhanced by many of her own delightful pen-and-ink drawings, is a welcome addition to existing memoirs of the era * GOOD BOOK GUIDE *
an acute and engaging observation of all that was happening around her. There are accounts of her struggles to cope with the overwhelming tide of casualties and what life was like outside the wards... The diaries contain the brief self-deprecating note she made when she received the Military Medal for bravery during an enemy air raid, in which she continued to dress patients' wounds despite being injured herself... This beautiful book forms a fitting tribute * NURSING STANDARD *
The book gives a very good insight into the role of the VAD nurse in comforting and patching up the casualties on their way back to 'Blighty'. * STAND TO! The Western Front Association *
Frustrations of work, flirtations with doctors, gossip, the enjoyment of precious days off - reading about all of this helps to gain insight into what it was like to go through the First World War. This is a book that will fascinate many readers * CHURCH OF ENGLAND NEWSPAPER *
As well as seeing the constant dangers, difficulties and frequent heartbreak - although it is far from being all doom and gloom - we discover the warm, optimistic, good-humoured personality of a real heroine * THIS ENGLAND *
Dorothea Crewdson was born in Bristol in July 1886 and brought up in Nottingham. In 1911 she enrolled in the British Red Cross as a VAD nurse and passed her exams the following year. In May 1915 she received instructions to be stationed in Le Treport in northern France. She spent the rest of the war nursing at the frontline in various field hospitals and was awarded the military medal for her bravery. She died in March 1919 after contracting peritonitis, just before she was due to return home to England. Her diaries are edited by her nephew, Richard Crewdson.
GOR005694456
9781780224824
1780224826
Dorothea's War: A First World War Nurse Tells Her Story by Dorothea Crewdson
Dorothea Crewdson
Used - Very Good
Paperback
Orion Publishing Co
2014-03-27
320
N/A
Book picture is for illustrative purposes only, actual binding, cover or edition may vary.
This is a used book - there is no escaping the fact it has been read by someone else and it will show signs of wear and previous use. Overall we expect it to be in very good condition, but if you are not entirely satisfied please get in touch with us
Trustpilot