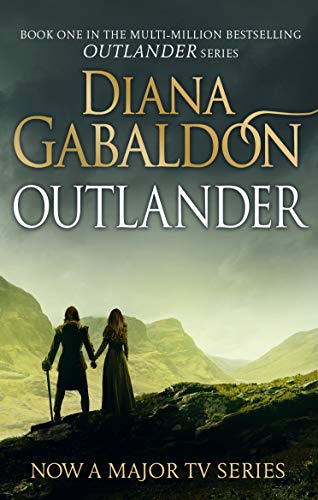 1946, and Claire Randall goes to the Scottish Highlands with her husband Frank. It's a second honeymoon, a chance to learn how war has changed them. But one afternoon, Claire walks through a circle of standing stones and vanishes into 1743, where the first person she meets is a British army officer - her husband's six-times great-grandfather.

THE FIRST NOVEL IN THE BESTSELLING OUTLANDER SERIES. As seen on Amazon Prime TV.

What if your future was the past?

1946, and Claire Randall goes to the Scottish Highlands with her husband Frank. It's a second honeymoon, a chance to re-establish their loving marriage. But one afternoon, Claire walks through a circle of standing stones and vanishes into 1743, where the first person she meets is a British army officer - her husband's six-times great-grandfather.

Unfortunately, Black Jack Randall is not the man his descendant is, and while trying to escape him, Claire falls into the hands of a gang of Scottish outlaws, and finds herself a Sassenach - an outlander - in danger from both Jacobites and Redcoats.

Marooned amid danger, passion and violence, her only chance of safety lies in Jamie Fraser, a gallant young Scots warrior. What begins in compulsion becomes urgent need, and Claire finds herself torn between two very different men, in two irreconcilable lives.

DIANA GABALDON is the author of the international bestselling Outlander novels and Lord John Grey series.

She says that the Outlander series started by accident: 'I decided to write a novel for practice in order to learn what it took to write a novel, and to decide whether I really wanted to do it for real. I did - and here we all are trying to decide what to call books that nobody can describe, but that fortunately most people seem to enjoy.'

And enjoy them they do - in their millions, all over the world. Published in 42 countries and 38 languages, in 2014 the Outlander novels were made into an acclaimed TV series starring Sam Heughan as Jamie Fraser and Caitriona Balfe as Claire. The series has now been renewed for a fifth and sixth season.

Diana lives with her husband and dogs in Scottsdale, Arizona and is currently at work on her ninth Outlander novel.

GOR006913827
9781784751371
1784751375
Outlander: (Outlander 1) by Diana Gabaldon
Diana Gabaldon
Outlander
Used - Very Good
Paperback
Cornerstone
2015-02-19
880
N/A
Book picture is for illustrative purposes only, actual binding, cover or edition may vary.
This is a used book - there is no escaping the fact it has been read by someone else and it will show signs of wear and previous use. Overall we expect it to be in very good condition, but if you are not entirely satisfied please get in touch with us
Trustpilot