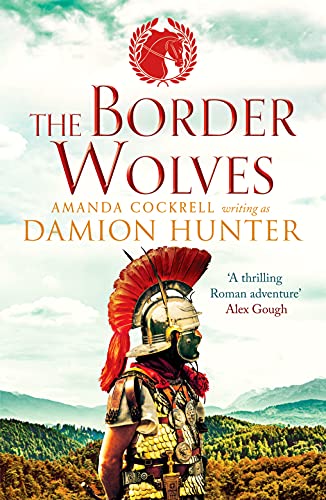 The Border Wolves by Damion Hunter

The Border Wolves: A gripping novel of Ancient Rome by Damion Hunter

The final thrilling tale of the House of Appius Julianus.

A new and deadly threat has emerged at the outskirts of the Roman Empire on the Danube, one that threatens to throw the entire region into chaos.

Correus, risen to prefect of a cavalry ala on the border, and Flavius, advisor to the emperor, have both attempted to warn the erratic Domitian of the seriousness of this foe, but to no avail.

With trouble at home in the form of an irate senator, as well as the impending doom of a devastating military loss, the two brothers must use their accumulated experience, grit and trust in each other to ensure their family's safety, once and for all.

The final book in the epic Centurions series, and the first instalment for almost forty years, a moving and powerful adventure, and a must-read for all historical fiction fans, ideal for readers of Conn Iggulden, Rosemary Sutcliff and Simon Scarrow.

'Amanda Cockrell has the finest sense of history, character, and narrative I've seen since Rosemary Sutcliff' Delia Sherman, author of The Porcelain Dove

'The novel is action-packed and descriptive at the same time, which lends to the successful scenes that the reader can enjoy' Historical Novel Society

Damion Hunter is a pseudonym of Amanda Cockrell. Along with the Centurions Trilogy, she is also the author of Pomegranate Seed, What We Keep Is Not Always What Will Stay, the historical trilogies The Deer Dancers and The Horse Catchers, and The Legions of the Mist, a Roman historical adventure novel. She lives in Roanoke, Virginia.

GOR011704883
9781800322899
1800322895
The Border Wolves: A gripping novel of Ancient Rome by Damion Hunter
Damion Hunter
The Centurions
Used - Very Good
Paperback
Canelo
20210708
416
N/A
Book picture is for illustrative purposes only, actual binding, cover or edition may vary.
This is a used book - there is no escaping the fact it has been read by someone else and it will show signs of wear and previous use. Overall we expect it to be in very good condition, but if you are not entirely satisfied please get in touch with us
Trustpilot