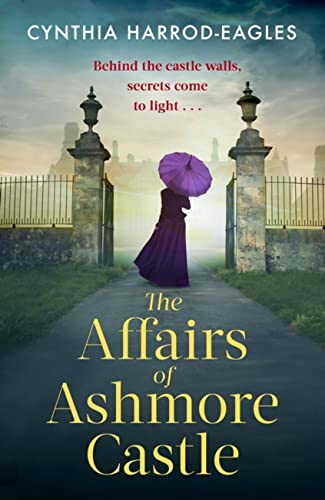 The Affairs of Ashmore Castle by Cynthia Harrod-Eagles

The second in the Ashmore Castle historical family drama series, set at the turn of the twentieth century, by the author of the acclaimed Morland Dynasty novels.

The Affairs of Ashmore Castle by Cynthia Harrod-Eagles

The second novel in the Ashmore Castle series, perfect for fans of DOWNTON ABBEY, from the author of the hugely successful MORLAND DYNASTY novels

Behind the doors of the magnificent Ashmore Castle, secrets are waiting to be uncovered . . .

England, 1903.
Giles, the new Earl of Stainton, is struggling to bring his family's estate back to order after the death of his father, and he has little time to spare for his young pregnant wife, Kitty. She lives in fear of her mother-in-law, who won't give up the reins of the household. Will she ever truly be mistress of Ashmore Castle? Perhaps if her coming child is a boy, that will change the balance of power...

Meanwhile, the Earl's younger sisters are having their first taste of romance, but not necessarily with the right people. Richard is pursuing his forbidden relationship with Molly, while Nina makes a lively new friend who leads her straight into trouble and pushes her relationship with her husband to the limit.

And below stairs, ambition, jealousy and revenge stalk the corridors, while a tragic suicide, a tender romance, and finally a mysterious disappearance challenge the castle's residents, both high and low . . .

The second novel in the Ashmore Castle historical family drama series, filled with heartbreak, romance and intriguing secrets waiting to be uncovered. The perfect read for fans of Downton Abbey, Bridgerton and rich period dramas.
Cynthia Harrod-Eagles is the author of the hugely popular Morland Dynasty novels, which have captivated and enthralled readers for decades. She is also the author of the contemporary Bill Slider mystery series, as well as her recent series, War at Home, which is an epic family drama set against the backdrop of World War I. Cynthia's passions are music, wine, horses, architecture and the English countryside.
NGR9781408725306
9781408725306
1408725304
The Affairs of Ashmore Castle by Cynthia Harrod-Eagles
Cynthia Harrod-Eagles
Ashmore Castle
New
Hardback
Little, Brown Book Group
20220811
448
N/A
Book picture is for illustrative purposes only, actual binding, cover or edition may vary.
This is a new book - be the first to read this copy. With untouched pages and a perfect binding, your brand new copy is ready to be opened for the first time
Trustpilot