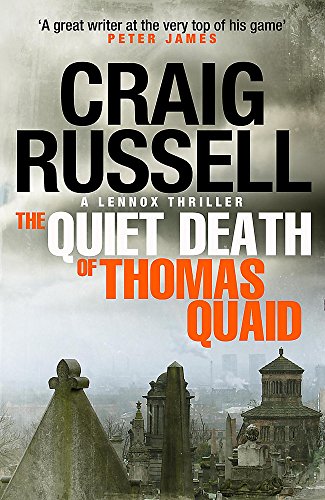 The Quiet Death of Thomas Quaid by Craig Russell

PI Lennox - the Scottish Philip Marlowe - returns with a new helping of fast-paced detective noir. where the violent death of Quiet Thomas Quaid shows that Quaid's life had been anything but quiet. From the winner of of the Bloody Scotland Crime Novel of the Year

The Quiet Death of Thomas Quaid: Lennox 5 by Craig Russell

PI Lennox - the Scottish Philip Marlowe - returns with a new helping of fast-paced detective noir. where the violent death of Quiet Thomas Quaid shows that Quaid's life had been anything but quiet. From the winner of of the Bloody Scotland Crime Novel of the Year.

Lennox liked Quiet Tommy Quaid. Perhaps it's odd for a private detective to like - even admire - a career thief, but Quiet Tommy Quaid was the sort of man everyone liked. Amiable, easy-going, well-dressed, with no vices to speak of - well, aside from his excessive drinking and womanising, but then in 1950s Glasgow those are practically virtues. And besides, throughout his many exploits outside the law, Quiet Tommy never once used violence. It was rumoured to be the police who gave him his nickname - because whenever they caught him, which was not often, he always came quietly. So probably even the police liked him, deep down.

Above all, the reason people liked Tommy was that you knew exactly what you were dealing with. Here, everybody realized, was someone who was simply and totally who and what he seemed to be.

But when Tommy turns up dead, Lennox and the rest of Glasgow will find out just how wrong they were.

Vivid and compelling, with a dark sense of place, even darker characters, and deliciously noir humour. Craig Russell is a great writer at the top of his game * Peter James *
Craig Russell brilliantly uses the character of his tough, funny and hopeful man Lennox to give us the eyes and ears on a time and place . . . storytelling at its very best! * Michael Connelly *
The kind of thriller-writing that made me want to be a writer in the first place * Christopher Brookmyre *
Russell's 1950s Glasgow is dank, murky and excellently realised . . . as sharp as an upper cut without being contrived * The Scotsman *
Lennox is a private eye for the ages - tough, uncompromising and insightful . . Russell has brilliantly captured post-war Glasgow * Michael Rowbotham *
Russell remains one of the more intelligent and sophisticated proponents of the genre * Herald Scotland *
Craig Russell is the author of the Jan Fabel thrillers set in contemporary Hamburg and the Lennox series set in 1950s Glasgow. He is the only non-German to have been awarded the Polizeistern (Police Star) by the Polizei Hamburg. He has been shortlisted for the CWA Duncan Lawrie Golden Dagger, the French Prix Polar, the 2012 Bloody Scotland Crime Book of the Year and the 2013 Ellis Peters Historical Dagger, and has won the CWA Dagger in the Library and the 2015 Bloody Scotland Crime Book of the Year
GOR007681251
9781780874890
1780874898
The Quiet Death of Thomas Quaid: Lennox 5 by Craig Russell
Craig Russell
Lennox
Used - Very Good
Paperback
Quercus Publishing
2016-08-04
384
N/A
Book picture is for illustrative purposes only, actual binding, cover or edition may vary.
This is a used book - there is no escaping the fact it has been read by someone else and it will show signs of wear and previous use. Overall we expect it to be in very good condition, but if you are not entirely satisfied please get in touch with us
Trustpilot