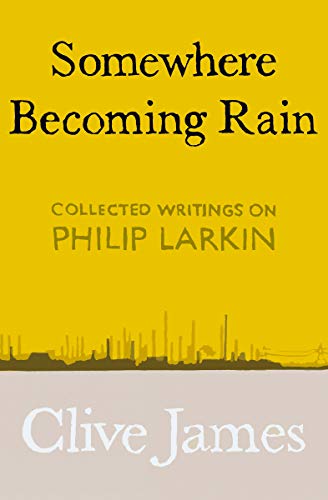 Renowned critic, bestselling author and award-winning poet Clive James offers an exploration and celebration of one of his favourite writers, Philip Larkin.

A love letter from one of the world's most critically acclaimed writers to one of its most cherished poets.

Clive James is a life-long admirer of the work of Philip Larkin. Somewhere Becoming Rain gathers all of James's writing on this towering literary figure of the twentieth century, together with extra material now published for the first time.

The greatness of Larkin's poetry continues to be obscured by the opprobrium attaching to his personal life and his private opinions. James writes about Larkin's poems, his novels, his jazz and literary criticism; he also considers the two major biographies, Larkin's letters and even his portrayal on stage in order to chart the extreme and, he argues, largely misguided equivocations about Larkin's reputation in the years since his death.

Through this joyous and perceptive book, Larkin's genius is delineated and celebrated. James argues that Larkin's poems, adored by discriminating readers for over half a century, could only have been the product of his reticent, diffident, flawed, and all-too-human personality.

Few contemporary critics display the passionate commitment to the idea of poetry, and to the idea of poetry's centrality to civilized life, that James does -- John Banville * New York Review of Books *
To read a major critic on a major poet is one of the great pleasures. Clive James's passion for the work of Philip Larkin, his intense scrutiny which reveals an extraordinary empathy makes Somewhere Becoming Rain: Collected Writings on Philip Larkin an outstanding book. -- Melvyn Bragg * New Statesman, Books of the Year 2019 *
One of the most important and influential writers of our time -- Bryan Appleyard * Sunday Times *
In Somewhere Becoming Rain, Clive James's collected essays on the poetry of Philip Larkin, the brilliance of James's analysis, his clear-sighted view of Larkin's solitude and humanity, and the fragile friendship between the two recorded in the book's final pages, provide a monument to human connection and isolation together. It's a perfect example of the "almost instinct" Larkin managed to prove "almost true" (hedging his bets to the end) - that what will survive of us is love. -- Andrew Hunter Murray * Guardian *
Clive James was the multi-million-copy bestselling author of more than forty books. As well as his memoirs, he has published essays, literary and television criticism, travel writing, verse and novels. As a television performer he has appeared regularly for both the BBC and ITV, most notably as writer and presenter of the Postcard series of travel documentaries. His poetry collection Sentenced to Life and his translation of Dante's The Divine Comedy were both Sunday Times top ten bestsellers, and his collections of verse were shortlisted for many prizes. In 2012 he was appointed CBE and in 2013 an Officer of the Order of Australia. He died in 2019.
GOR010234458
9781529028829
1529028825
Somewhere Becoming Rain: Collected Writings on Philip Larkin by Clive James
Clive James
Used - Very Good
Hardback
Pan Macmillan
2019-10-03
160
N/A
Book picture is for illustrative purposes only, actual binding, cover or edition may vary.
This is a used book - there is no escaping the fact it has been read by someone else and it will show signs of wear and previous use. Overall we expect it to be in very good condition, but if you are not entirely satisfied please get in touch with us
Trustpilot