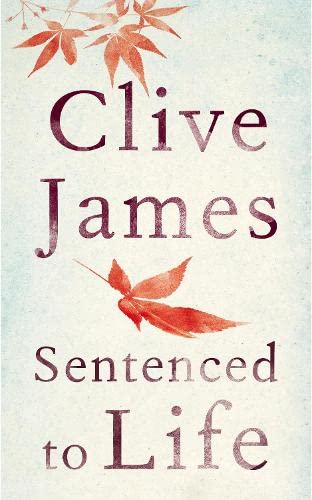 Sentenced to Life by Clive James

Sentenced to Life by Clive James

In his insightful collection of poems Clive James looks back over an extraordinarily rich life with a clear-eyed and unflinching honesty. There are regrets, but no trace of self-pity in these verses, which - for all their open dealings with death and illness - are primarily a celebration of what is treasurable and memorable in our time here.

Again and again, James reminds us that he is not only a poet of effortless wit and lyric accomplishment: he is also an immensely wise one, who delights in using poetic form to bring a razor-sharp focus to his thought. Miraculously, these poems see James writing with his insight and energy not only undiminished but positively charged by his situation: Sentenced to Life represents a career high point from one of the greatest literary intelligences of the age.

James was diagnosed with emphysema and kidney failure in early 2010 and almost all of the poems [in Sentenced to Life] deal with his illness (Dying by inches) and his facing up to the end of life. I read an advance copy recently and was moved, perhaps changed, by the experience. It's one thing to encounter such a poem now and then in a literary journal but to read 37 of them in one sitting is overwhelming . . . This is a sad book, depressing even, but it is full of insight and wisdom. -- Stephen Romei * The Australian *
A writer whose commanding voice contains a constant variety of colour and tone -- Robert McCrum * Observer *
Suffused with loss and guilt . . . although his impending death is ever-present in the verse, his humour still shines through . . . [James is] embarrassed at having lived with his death so long: High time to go, he says - how many last words, deathbed aphorisms and funeral songs can his public take? Quite a few is the answer, when they resonate as these poems do at their best. Keep at it, Clive. May you go on being embarrassed for some time -- Blake Morrison * Guardian *
James's recent poems, of course, are so much more than fuel for Grub Street; they represent the very best work James has ever done in verse -- Jason Guriel * New Republic *
His book of biographical essays, Cultural Amnesia, and his epic translation of Dante's Divine Comedy may well be considered his best works in a career featuring 40-plus published endeavours. His latest poetry book, Sentenced to Life, must be considered his bravest, a 37-poem fever sweat of longing and love, regret and acceptance . . . Sentenced to Life is 56 pages of deeply intense poetic language. Even the humour in this is pitch black * Australian *
These poems, in which his braggadocio and salaciousness have been subdued by his plight, are in many ways the most sympathetic he has written. . . What is most striking about this collection is its sustained expression of sorrow -- David Sexton * Evening Standard *
Sentenced to Life is a valedictory volume, concerned with the end of life, and with the slow robbery of terminal illness . . . After writing poems for 50 years, his technique is deft and assured * Independent on Saturday *
His poems have a poignancy and a moving recognition of the finality of life that all must face . . . Clive James is courageously fighting his dark future with that most powerful of weapons: poetry.He may lose the battle but his words will linger -- Paul Callan * Express *
These tight, lyrical poems, rich in allusiveness and association, demand our full attention and we are rewarded for such engagement . . . Sentenced to Life is a relatively short book at just 56 pages of poems. Its complexity and generosity of spirit make it seem so much longer * Saturday Paper *
There are a few other things making Clive James' recent poetry particularly poignant. One is the poet's physical inability to return to his homeland for a last look. Another is the sense that from that great bunch of guys, as James was once memorably described, the most important one was not the television star but the poet * Sydney Morning Herald *
There is an inevitable sadness to this moving collection. This being James, there are also moments of zinging energy and a sense of fun . . . James will remain in the present tense as those Japanese Maple's leaves continue to turn to flame. -- Rebecca K Morrison * Independent *
Raw and confessional yet beautifully crafted * GQ *
A brave and risky book. . . .with its mixture of technical verve (James had always been a master of form) and self-depreciating wit to leaven the pathos, it seems that he has reached the pinnacle of his powers . . . it would be hard to imagine a more elegant and restrained farewell -- John Burnside * New Statesman *
Sentenced to Life . . . speaks of the intensity of emotions before life's end. He writes with what George Eliot described as the acute consciousness of a man looking into the eyes of death * Irish Independent *
It's not common for any book of poetry to hit number two in the bestseller charts, but there it stands . . . Clive James, cracking graceful jokes in a room full of old friends and young admirers, showed there's another way to [face death] -- Sam Leith * Evening Standard *
Moving and witty * Mail on Sunday *
Worth many a repeat read . . . James's confrontation with his approaching death is nothing short of inspirational. Depressing? Melancholy rather: he is leaving a glittering life. But the very melancholy of its subject nourishes James's pleasures in all that remains. Regret and loss certainly, but a glowing love of all things that survive; sunlight, trees, places he loved. His will to confront the inevitable, so lightly expressed, comforts all of us getting on in years -- Joan Bakewell * Independent *
While it is to be hoped that these poems are not James's epitaph, he takes the precaution of providing one just in case. The fine sonnet Procedure for Disposal captures the headlong speed and energy of his life in a single, breathless sentence which, in the closing couplet, slows and falls like a feather into the sea. But Clive James has always made a far bigger splash than that * TLS *
Wise, witty, terrifying, unflinching and extraordinarily alive, they are both a great pleasure and a chill in the nerves. -- AS Byatt, Best Holiday Reads 2015 * Guardian *
His latest and finest collection. . . James has approached the time of his vanishing with grace and good humour, not sentimentality or anger. These essays and poems are death-haunted but radiant with the felt experience of what it means to be alive * Financial Times *
An old man recollecting lost youth is always an evocative theme but James turns the phrases and they catch the light. . .I submit: reader, look at these books, they're wonderful.Sentenced To Life is the work of a lifetime, at least so far -- Philip Collins * The Times *
[A] wonderful (and let's hope not last) collection -- Mary Beard
A magical work, direct, lyrical, moving, and wholly unsentimental -- John Banville * New York Review of Books *

Clive James is the author of more than forty books. As well as verse and novels, he has published collections of essays, literary criticism, television criticism and travel writing, plus five volumes of autobiography, his Unreliable Memoirs. In 1992 he was made a Member of the Order of Australia, and in 2003 he was awarded the Philip Hodgins memorial medal for literature.

His other poetry collections include Collected Poems, Angels Over Elsinore, Opal Sunset and Nefertiti in the Flak Tower.

GOR006734671
9781447284048
1447284046
Sentenced to Life by Clive James
Clive James
Used - Very Good
Hardback
Pan Macmillan
20150409
80
N/A
Book picture is for illustrative purposes only, actual binding, cover or edition may vary.
This is a used book - there is no escaping the fact it has been read by someone else and it will show signs of wear and previous use. Overall we expect it to be in very good condition, but if you are not entirely satisfied please get in touch with us
Trustpilot