The River in the Sky Clive James 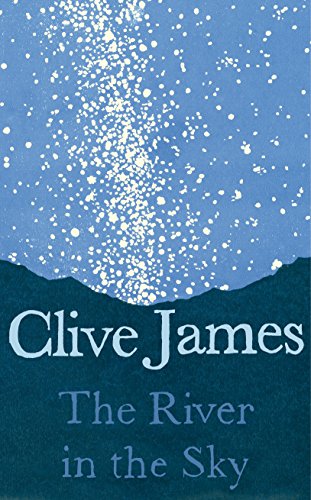 The River in the Sky by Clive James

A soaring autobiographical poem, meditating on death and celebrating life, from one of our most cherished, critically acclaimed and bestselling writers.

The River in the Sky by Clive James

Clive James has been close to death for several years, and he has written about the experience in a series of deeply moving poems. In Sentenced to Life, he was clear-sighted as he faced the end, honest about his regrets. In Injury Time, he wrote about living well in the time remaining, focusing our attention on the joys of family and art, and celebrating the immediate beauty of the world.

At the opening of The River in the Sky, a book-length poem, we find James in ill health but high spirits. Although his body traps him in his Cambridge house, his mind is free to roam.

The River in the Sky takes us on a grand tour of 'the fragile treasures of his life'. Animated by powerful recollections, James presents a flowing stream of vivid images. He moves from emotionally resonant personal moments, such as listening to jazz records with his future wife, to unforgettable encounters with all kinds of culture: Beethoven's Ninth Symphony sits alongside 'YouTube's vast cosmopolis'.

As ever with James, he shares his passions with enormous generosity, making brilliant and original connections, and fearlessly tackling the biggest questions: the meaning of life and how to live it. In the end, what emerges from this autobiographical epic is a soaring work of exceptional depth and overwhelming feeling, a new marvel for the modern age.

Clive James's book-length poem The River in the Sky is superb, an epic lament, written in late life, filled with exact and moving observations about life and culture. "If my ashes end up in an hour-glass," he wrote, "I can go on working." -- Dwight Garner * New York Times *
A collection of intellectual agility, playfulness and high jinks -- Kate Kellaway * Observer, Poetry Books of the Year, 2018 *
This ranging poem moves like a river, dawdling sometimes then opening out into its full force. Clive James is gathering a life full of event, people, humour and remorse, books and writing: all now present in the copiousness of memory. It is a book written in the knowledge that death is coming near. It feels, and communicates, the pleasures of being alive in your one inimitable life. -- Gillian Beer
Clive James delivered another book-length poem from the abyss, The River in the Sky, defying death again while revealing himself to be one of the most vital poets writing in English. -- Christopher Merrill * Paris Review *
Clive James was the multi-million-copy bestselling author of more than forty books. As well as his memoirs, he has published essays, literary and television criticism, travel writing, verse and novels. As a television performer he has appeared regularly for both the BBC and ITV, most notably as writer and presenter of the Postcard series of travel documentaries. His poetry collection Sentenced to Life and his translation of Dante's The Divine Comedy were both Sunday Times top ten bestsellers, and his collections of verse were shortlisted for many prizes. In 2012 he was appointed CBE and in 2013 an Officer of the Order of Australia. He died in 2019.
GOR009413660
9781509887231
1509887237
The River in the Sky by Clive James
Clive James
Used - Very Good
Hardback
Pan Macmillan
2018-09-06
112
N/A
Book picture is for illustrative purposes only, actual binding, cover or edition may vary.
This is a used book - there is no escaping the fact it has been read by someone else and it will show signs of wear and previous use. Overall we expect it to be in very good condition, but if you are not entirely satisfied please get in touch with us
Trustpilot