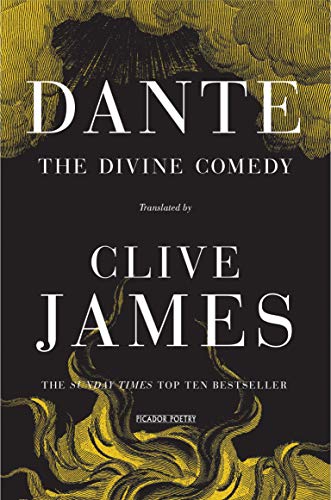 Renowned critic and poet Clive James presents the crowning achievement of his career: a monumental translation of Dante's The Divine Comedy. Shortlisted for the Costa Poetry Award 2013.

'Finally I realised that I had been practising for this job every time I wrote a quatrain . . . I had spent all this time - the greater part of a lifetime - preparing my instruments.'

The Divine Comedy is the precursor of modern literature, and Clive James's vivid translation - his life's work and decades in the making - presents Dante's entire epic poem in a single song.

While many poets and translators have attempted to capture the full glory of The Divine Comedy in English, many have fallen short. Victorian verse translations established an unfortunate tradition of reproducing the sprightly rhyming measures of Dante but at the same time betraying the strain on the translator's powers of invention. For Dante, the dramatic human stories of Hell were exciting, but the spiritual studies of Purgatory and the sublime panoramas of Heaven were no less so.

In this incantatory translation, James - defying the convention by writing in quatrains - tackles these problems head-on and creates a striking and hugely accessible translation that gives us The Divine Comedy as a whole, unified, and dramatic work.

Clive James's new translation is wonderfully unstuffy and injects fresh life back into the poem. -- Mary Beard, Best Holiday Reads 2013 * Observer *
'An outstanding achievement . . . He restores the sense of drama, the colours and music of Dante's vision . . . Clive James has now given us a translation worthy of this and any other time; and a great piece of literature in its own right' - Robert Fox, Evening Standard
'an extraordinary verse-rendering - the fruit of many years' work - of Dante's The Divine Comedy. According to TS Eliot, this is the only book in the western tradition that surpasses Shakespeare. It is typical of James's chutzpah that he has not only tackled this Everest of translation, but has scrambled to the summit in triumph . . . The result is a revelation. The reader is swept up in the drama of Inferno . . . The tempo and texture of the poem has an inevitable majesty, but there is also a dancing levity that is suited to James and his joking seriousness' Robert McCrum, Guardian
A triumph of great poetry and accessibility. Wonderful. -- Melvyn Bragg, Books of the Year * Observer *
'Clive James comes to the Comedy with two important attributes: many years study of the poem and an impressively accomplished verse technique' - Sean O'Brien, Independent Book of the Week
'Like most successful translations, there is a sense of the personal throughout... the poetry is certainly here, spurring the reader to learn more.' The Times Saturday Review
'This is the translation that many of us had abandoned all hope of finding. Clive James's version is the only one that conveys Dante's variety, depth, subtlety, vigor, wit, clarity, mystery, and awe in rhymed English stanzas that convey the music of Dante's triple rhymes. This book lets Dante's genius shine through as it never did before in English verse, and is a reminder that James' poetry has always been his finest work.' Edward Mendelson, Columbia University
Punchy, theologically serious and frequently funny verse. -- Mark Lawson, Books of the Year * Observer *
'Clive James' translation of The Divine Comedy is a remarkable achievement: not a scowling marble Dante of sublime set-pieces but a living, breathing poet shifting restlessly through a dizzying succession of moods, perceptions, and passions. Under James' uncanny touch, seven long centuries drop away, and the great poem is startlingly fresh and new.' Stephen Greenblatt, Harvard University, author of The Swerve
For those who have never quite managed the reverence for Dante required of the well-read, there is at last a translation that makes The Divine Comedy everything it's billed: Clive James's version in quatrain. Suddenly the voice - from teasingly conversational to clangorously epic to tenderly lyric - is right beside you even when it's a talking beast . . . Read it out loud in bed (softly). -- Simon Schama, Book of the Year * Financial Times *
Fresh, impressive new translation of The Divine Comedy that is both easy-going and lucid -- Best Books of 2013 * Sunday Times *
An excellent new version of Dante's masterpiece. Eschewing Dante's terza rima, he has opted instead to write in rhyming quatrains, but without spaces between them, so each canto is a solid block of text. James handles the rhythm with ease and assurance, using enjambment freely, and brings a colloquial tone to the translation.. .wonderfully conveys the strangeness and vastness of Dante's vision. An impressive work of scholarship, and of poetry in its own right * Independent *
Clive James was the multi-million-copy bestselling author of more than forty books. As well as his memoirs, he has published essays, literary and television criticism, travel writing, verse and novels. As a television performer he has appeared regularly for both the BBC and ITV, most notably as writer and presenter of the Postcard series of travel documentaries. His poetry collection Sentenced to Life and his translation of Dante's The Divine Comedy were both Sunday Times top ten bestsellers, and his collections of verse were shortlisted for many prizes. In 2012 he was appointed CBE and in 2013 an Officer of the Order of Australia. He died in 2019.
GOR006888425
9781447244226
1447244222
The Divine Comedy by Clive James
Clive James
Used - Very Good
Paperback
Pan Macmillan
20150604
560
Short-listed for Costa Poetry Award 2014 (UK)
Book picture is for illustrative purposes only, actual binding, cover or edition may vary.
This is a used book - there is no escaping the fact it has been read by someone else and it will show signs of wear and previous use. Overall we expect it to be in very good condition, but if you are not entirely satisfied please get in touch with us
Trustpilot