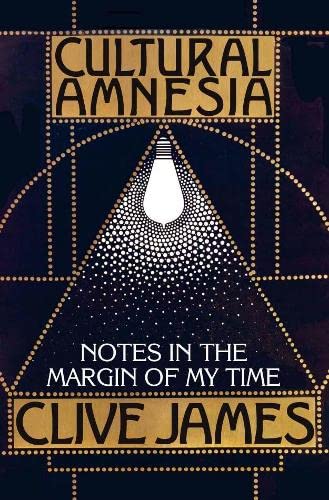 The story of a hundred years as told by Clive James

Cultural Amnesia: Notes in the Margin of My Time by Clive James

`In the forty years it took me to write this book, I only gradually realized that the finished work, if it were going to be true to the pattern of my experience, would have no pattern . . . The book I wanted to write had its origins in the books I was reading. Several times, in my early days, I had to sell my best books to buy food, so I never underlined anything. When conditions improved I became less fastidious. Not long after I began marking passages for future consideration, I also began keeping notes in the margin beside the markings, and then longer notes on the endpapers . . . As the time for assembling my reflections approached, I resolved that a premature synthesis was the thing to be avoided. So this is a book about how not to reach one. If I have done my job properly, themes will emerge from the apparent randomness and make this work intelligible. But it will undoubtedly be a turbulent read, and if this book were not difficult, it would not be true.'

A lifetime in the making, Cultural Amnesia is the book Clive James has always wanted to write. Organized from A through to Z, and containing over 100 essays, it's the ultimate guide to the twentieth century, illuminating the careers of many of its greatest thinkers, humanists, musicians, artists and philosophers. From Louis Armstrong to Ludwig Wittgenstein, via Walter Benjamin, Sigmund Freud, Franz Kafka and Marcel Proust, it's a book for our times - and, indeed, for all time.

For non-fiction, there was one stupedous starburst of wild brilliance: Clive James's Cultural Amnesia. It crackles with epigrammatic mischief and reminded me of Charles Dantzig's great Dictionnair egoiste de la litterature francaise, a book that features a devastating skewering of Sartre and a spirited defence of the adjective, plus essays on ignorance, cliches, therapy (against it) digressions (for) and lettres. Will someone please get this fabulous box of tricks translated? -- Simon Schama
Clive James is the author of more than forty books. As well as essays, he has published collections of literary and television criticism, travel writing, verse and novels, plus five volumes of autobiography, Unreliable Memoirs, Falling Towards England, May Week Was In June, North Face of Soho and The Blaze of Obscurity. As a television performer he appeared regularly for both the BBC and ITV, most notably as writer and presenter of the Postcard series of travel documentaries. His popular Radio 4 series A Point of View has been published in volume form. He has also published several poetry collections, a verse commentary of Proust, Gate of Lilacs, and a translation of Dante's The Divine Comedy. In 1992 he was made a Member of the Order of Australia and in 2003 he was awarded the Philip Hodgins memorial medal for literature. He holds honorary doctorates from Sydney University and the University of East Anglia. In 2012 he was appointed CBE and in 2013 an Officer of the Order of Australia.
GOR001276822
9780330481748
0330481746
Cultural Amnesia: Notes in the Margin of My Time by Clive James
Clive James
Used - Very Good
Hardback
Pan Macmillan
2007-05-18
912
Short-listed for Prime Minister's Literary Awards (Australia): Non-Fiction 2008
Book picture is for illustrative purposes only, actual binding, cover or edition may vary.
This is a used book - there is no escaping the fact it has been read by someone else and it will show signs of wear and previous use. Overall we expect it to be in very good condition, but if you are not entirely satisfied please get in touch with us
Trustpilot