The Blaze of Obscurity Clive James 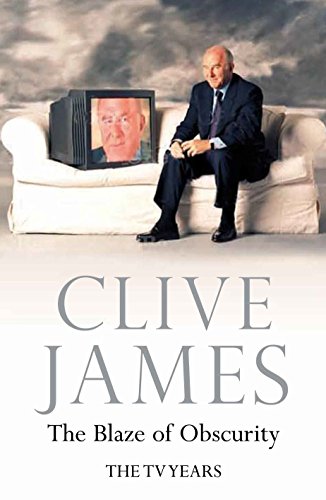 The Blaze of Obscurity by Clive James

The Blaze of Obscurity: The TV Years by Clive James

For many people, Clive James will always be a TV presenter first and foremost, and a writer second -- this despite the fact that his adventures with the written word took place before, during and after his time on the small screen. Nevertheless, for those who remember clips of Japanese endurance gameshows and Egyptian soap operas, Clive reinventing the news or interviewing Hefner and Hepburn, Polanski and Pavarotti, Clive's 'Postcards' from Kenya, Shanghai and Dallas, or Clive James Racing Driver, Clive's rightful place does seem to be right there -- on the box, in our homes, and almost one of the family.

However you think of him, though, and whatever you remember him for, The Blaze of Obscurity is perhaps Clive's most brilliant book yet. Part Clive James on TV and part Clive James on TV, it tells the inside story of his years in television, shows Clive on top form both then and now, and proves -- once and for all -- that Clive has a way with words . . . whatever the medium.

Clive James is the author of more than forty books. As well as essays, he has published collections of literary and television criticism, travel writing, verse and novels, plus five volumes of autobiography, Unreliable Memoirs, Falling Towards England, May Week Was In June, North Face of Soho and The Blaze of Obscurity. As a television performer he appeared regularly for both the BBC and ITV, most notably as writer and presenter of the Postcard series of travel documentaries. His popular Radio 4 series A Point of View has been published in volume form. He has also published several poetry collections, a verse commentary of Proust, Gate of Lilacs, and a translation of Dante's The Divine Comedy. In 1992 he was made a Member of the Order of Australia and in 2003 he was awarded the Philip Hodgins memorial medal for literature. He holds honorary doctorates from Sydney University and the University of East Anglia. In 2012 he was appointed CBE and in 2013 an Officer of the Order of Australia.
GOR008551803
9780330457361
0330457365
The Blaze of Obscurity: The TV Years by Clive James
Clive James
Used - Like New
Hardback
Pan Macmillan
20091002
336
N/A
Book picture is for illustrative purposes only, actual binding, cover or edition may vary.
The book has been read, but looks new. The book cover has no visible wear, and the dust jacket is included if applicable. No missing or damaged pages, no tears, possible very minimal creasing, no underlining or highlighting of text, and no writing in the margins
Trustpilot