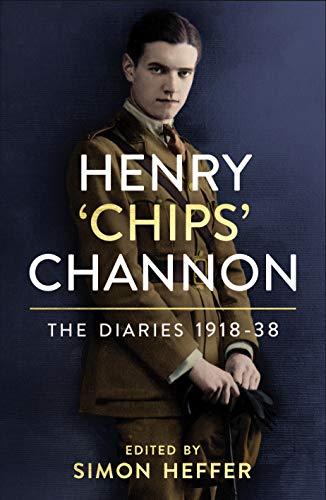 Born in Chicago in 1897, 'Chips' Channon settled in England after the Great War, married into the immensely wealthy Guinness family, and served as Conservative MP for Southend-on-Sea from 1935 until his death in 1958.

Born in Chicago in 1897, 'Chips' Channon settled in England after the Great War, married into the immensely wealthy Guinness family, and served as Conservative MP for Southend-on-Sea from 1935 until his death in 1958. His career was unremarkable. His diaries are quite the opposite. Elegant, gossipy and bitchy by turns, they are the unfettered observations of a man who went everywhere and who knew everybody. Whether describing the antics of London society in the interwar years, or the growing scandal surrounding his close friends Edward VIII and Wallis Simpson during the abdication crisis, or the mood in the House of Commons in the lead up to the Munich crisis, his sense of drama and his eye for the telling detail are unmatched. These are diaries that bring a whole epoch vividly to life.

A heavily abridged and censored edition of the diaries was published in 1967. Only now, sixty years after Chips's death, can an extensive text be shared.

The greatest British diarist of the 20th century. A feast of weapons-grade above-stairs gossip. Now, finally, we are getting the full text, in all its bitchy, scintillating detail, thanks to the journalist and historian Simon Heffer, whose editing of this vast trove of material represents an astonishing achievement. Channon is a delightful guide, by turns frivolous and profound. -- Ben Macintyre * The Times *
Wickedly entertaining . . . scrupulously edited and annotated by Simon Heffer. Genuinely shocking, and still revelatory. -- Andrew Marr * New Statesman *
The between-the-wars diaries of the romping, social-climbing MP Henry Channon make for an irresistible, saucy read. There are plenty of anecdotes, bons mots and delicious tales of scandal . . . one of the most impressive editions of our time. * The Telegraph *
Channon's chief virtue as a writer is his abiding awareness that dullness is the worst sin of all, and for this reason they're among the most glittering and enjoyable [diaries] ever written * The Observer *
Although Channon was frequently wrong and occasionally repellent, there is no denying his talent as a diarist or the historical value of his diaries. Lacking pomposity or dissemblance, his entries are often witty, sometimes perceptive, and always fascinating * Air Mail *
The diaries are fascinating and sometimes a key historical record. And the man could write. * Daily Mirror *
Heffer has done his job with scholarly aplomb. Throughout his life [Chips] had the knack - invaluable for a diarist with dreams of publication - of bumping into all the right people. Fascinating stuff . . . a work of high camp. -- Craig Brown * The Spectator *
Gripping reading . . . While countless of Chip's decent contemporaries and especially politicians are today forgotten, the diaries make him an indispensable source for anyone writing of this period. -- Max Hastings * The Sunday Times *
Chips Channon, the bisexual snob and socialite who hobnobbed (and more) with royalty, politicians and famous writers . . . a new, expanded version of his disclosures has left some readers gasping at his audacity, indiscretion and promiscuity. -- AN Wilson * The Times Weekend Essay *
Channon is a delightful guide, by turns frivolous and profound. * The Times Book of the Week *
Sir Henry (Chips) Channon was born in Chicago in 1897 (although he claimed 1899 as the year of his birth, until the true facts were exposed - to his embarrassment - in the Sunday Express). The son of a wealthy businessman, he accompanied the American Red Cross to Paris in 1917, was an undergraduate at Christ Church, Oxford, and then settled in London where he mingled with society and enjoyed the high life. He married into the Guinness family, and became a Conservative MP for Southend from 1935 until his death. He knew or was friends with all the leading politicians and aristocrats of the period, wined and dined Edward VIII and Wallis Simpson in the months before the Abdication crisis, and observed at first hand the last days of appeasement. He died in 1958. Elliot Templeton in Somerset Maugham's novel The Razor's Edge (1944) and the disappointed schoolmaster Croker-Harris in Rattigan's play The Browning Version (1948) were partly inspired by Channon.
NGR9781786331816
9781786331816
1786331810
Henry 'Chips' Channon: The Diaries (Volume 1): 1918-38 by Chips Channon
Chips Channon
New
Hardback
Cornerstone
2021-03-04
1024
N/A
Book picture is for illustrative purposes only, actual binding, cover or edition may vary.
This is a new book - be the first to read this copy. With untouched pages and a perfect binding, your brand new copy is ready to be opened for the first time
Trustpilot