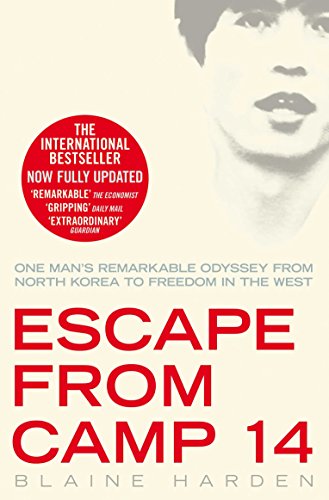 Escape from Camp 14 by Blaine Harden

Introducing the incredible story of Shin Dong-hyuk - the only person born in a North Korean gulag ever to escape . . .

Escape from Camp 14: One Man's Remarkable Odyssey from North Korea to Freedom in the West by Blaine Harden

'This is a story unlike any other' - Barbara Demick, author of Nothing to Envy: Ordinary Lives in North Korea.

Twenty-seven years ago, Shin Dong-hyuk was born inside Camp 14, one of five sprawling political prisons in the mountains of North Korea. Located about fifty-five miles north of Pyongyang, the labor camp is a 'complete control district,' a no-exit prison where the only sentence is life.

No one born in Camp 14 or in any North Korean political prison camp has escaped. No one except Shin. This is his story.

A gripping, terrifying biography with a searing sense of place, Escape from Camp 14 by journalist Blaine Harden will unlock, through Shin, a dark and secret nation, taking readers to a place they have never before been allowed to go.

This is a story unlike any other because Shin is one of the few, if not only, long-term prisoners to have escaped from the North Korean gulag . . . More so than any other book on North Korea, including my own, Escape from Camp 14 exposes the cruelty that is the underpinning of Kim Jong Il's regime. Blaine Harden, a veteran foreign correspondent from The Washington Post, tells this story masterfully . . . The integrity of this book, shines through on every page. -- Barbara Demick, author of Nothing to Envy: Ordinary Lives in North Korea
`Harrowing . . . Harden's account of Shin's extraordinary, perilous journey through North Korea and into China (which has a history of sending asylum seekers back to North Korea) and later to South Korea is gripping stuff . . . bearing witness will be Shin's legacy' Daily Mail
`Harden sheds light on the horrors of North Korea, with a gripping account of the story of Shin In Geun' Financial Times - Favourite Books of 2012
'Until recently, full accounts of life in this famine-riven dystopia were hard to come by. Then a couple of years ago, Barbara Demick's Nothing to Envy provided excoriating testimonies of refugees who had managed to escape into China and then on to South Korea. The picture those witnesses drew of North Korea was of one vast and brutal gulag. Now comes Escape From Camp 14, a still more harrowing account of the gulag within the gulag, the huge prison camps that litter the more remote provinces of this benighted country. Written by Blaine Harden, an experienced American journalist, it tells the extraordinary story of Shin Dong-hyuk, the only person born in the gulag to have escaped' Guardian
`Harden knows a lot about North Korea and he wears his knowledge lightly . . . Harden deserves a lot more than `wow' for this terrifying, grim and, at the very end, slightly hopeful story of a damaged man still alive only by chance, whose life, even in freedom, has been dreadful' Literary Review
Harrowing story of a young man's flight from one of the slave labor camps where as many as 200,000 political unreliables - a category that includes not just those who run afoul of authority but their relatives for three generations - are sent to be starved, tortured and ultimately worked to death. Harden's book, besides being a gripping story, unsparingly told, carries a freight of intelligence about this black hole of a country' * New York Times *
`A skilfully researched piece of book-length journalism uncluttered, as far as seems reasonable, with emotion. It is old now, the saying that for evil to exist, good men must do nothing. And that is what you take away, more than anything, from Harden's book. More than why the crimes against humanity are happening in the first place, more than whose responsibility it is to stop them, the question is why - for the sake not of politics but of mankind - is nobody in power doing anything about it?' Spectator
`Shin's existence in the camp and his escape to the unknown world beyond its fences is the remarkable and harrowing tale that former Washington Post reporter Blaine Harden recounts in spare, unadorned prose in Escape From Camp 14 . . . while the horrors of the Russian gulag, Nazi genocide and Cambodian mass murders have been amply documented, North Korea's grisly conditions remain shadowy and under-publicized. In depicting the depravity of North Korean prison life, Harden's book is an important portrait of man's inhumanity to man' Washington Post
Blaine Harden is a reporter for PBS Frontline and a contributor to the Economist, based in Seattle, having completed a tour as the Washington Post's bureau chief in Tokyo. He is the prize-winning, acclaimed author of two books: Africa: Dispatches from a Fragile Continent and A River Lost: The Life and Death of the Columbia and the author of Escape from Camp 14.
GOR004856179
9780330519540
0330519549
Escape from Camp 14: One Man's Remarkable Odyssey from North Korea to Freedom in the West by Blaine Harden
Blaine Harden
Used - Very Good
Paperback
Pan Macmillan
2013-03-27
288
N/A
Book picture is for illustrative purposes only, actual binding, cover or edition may vary.
This is a used book - there is no escaping the fact it has been read by someone else and it will show signs of wear and previous use. Overall we expect it to be in very good condition, but if you are not entirely satisfied please get in touch with us
Trustpilot