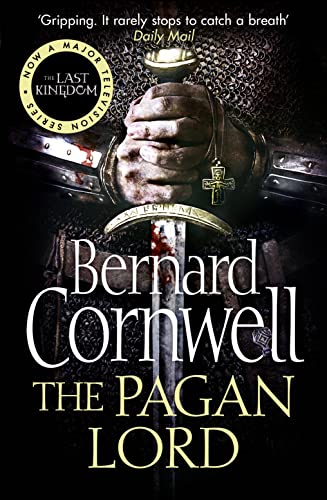 The Pagan Lord by Bernard Cornwell

The seventh novel in Bernard Cornwell's number one bestselling series on the making of England and the fate of his great hero, Uhtred of Bebbanburg.

The seventh novel in Bernard Cornwell's number one bestselling series on the making of England and the fate of his great hero, Uhtred of Bebbanburg.

Uhtred - sword of the Saxons, bane of the Vikings - has been declared outcast.

Peace in Britain has given Uhtred time to cause trouble - for himself. Branded a pagan abomination by the church, he sails north. For, despite suspecting that Viking leader Cnut Longsword will attack the Saxons again, Uhtred is heading for Bebbanburg, fearing that if he does not act now he will never reclaim his stolen birthright.

Yet Uhtred's fate is bound to the Saxons. To Aethelflaed, bright lady of Mercia and to a dead king's dream of England. For great battles must still be fought - and no man is better at that than Uhtred.

Uhtred of Bebbanburg's mind is as sharp as his sword. A thorn in the side of the priests and nobles who shape his fate, this Saxon raised by Vikings is torn between the life he loves and those he has sworn to serve.

'A tense, powerful and compulsive story' THE TIMES

'Strong narrative, vigourous action and striking characterisation, Cornwell remains king of the territory he has staked out as his own' SUNDAY TIMES

'Nobody in the world does this better than Cornwell' Lee Child

This is a magnificent and gory work' Daily Mail

'The historical blockbuster of the year' EVENING STANDARD

'A master of storytelling' SUNDAY TELEGRAPH

This is typical Cornwell, meticulously researched, massive in scope, brilliant in execution' NEWS OF THE WORLD

GOR005694401
9780007331925
0007331924
The Pagan Lord (The Last Kingdom Series, Book 7) by Bernard Cornwell
Bernard Cornwell
The Last Kingdom Series
Used - Very Good
Paperback
HarperCollins Publishers
2014-05-22
368
N/A
Book picture is for illustrative purposes only, actual binding, cover or edition may vary.
This is a used book - there is no escaping the fact it has been read by someone else and it will show signs of wear and previous use. Overall we expect it to be in very good condition, but if you are not entirely satisfied please get in touch with us
Trustpilot