Betrayal: The Centurions I Anthony Riches 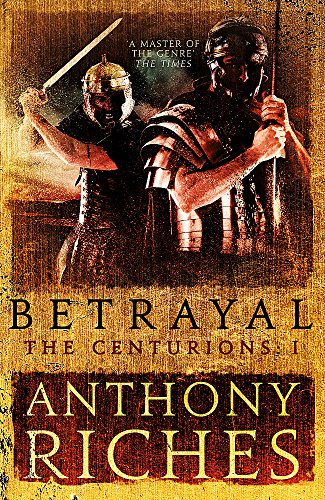 Betrayal: The Centurions I by Anthony Riches

The author of the bestselling Empire sequence begins a new epic set against a dark episode in the history of Imperial Rome: the revolt of the Batavi in the Year of the Four Emperors.

Betrayal: The Centurions I by Anthony Riches

Rome, AD 68. Nero has committed suicide. One hundred years of imperial rule by the descendants of Julius Caesar has ended, and chaos rules.

His successor Galba dismisses the incorruptible Germans of the Imperial Bodyguard for the crime of loyalty to the dead emperor. Ordering them back to their homeland he releases a Batavi officer from a Roman prison to be their prefect. But Julius Civilis is not the loyal servant of empire that he seems.

Four centurions, two Batavi and two Roman, will be caught up in the intrigues and the battles that follow - as friends, as victims, as leaders and as enemies.

Hramn is First Spear of the Bodyguard. Fiercely proud of his men's honour, and furious at their disgrace, he leads them back to the Batavi homeland to face an uncertain future.

Alcaeus is a centurion with the tribe's cohorts serving Rome on the northern frontier - men whose fighting skills prove crucial as Roman vies with Roman for the throne. A wolf-priest of Hercules, he wields the authority of his god and his own fighting prowess.

Marius is a Roman, first spear of the Fifth Legion: a self-made man who hates politics, but cannot avoid them in a year of murderous intrigue.

Aquillius, former first spear of the Eighth Augustan, like Hramn, is in disgrace for refusing to dishonour his oath of loyalty. But their paths will lead them to opposite sides of an unforgiving war.

And Civilis, Kivilaz to his countrymen, heroic leader, Roman citizen and patriotic Batavi, will change both the course of the Empire's destiny and that of the centurions.

A master of the genre - The TimesThis is fast-paced and gripping "read-through-the-night" fiction, with marvellous characters and occasional moments of dark humour. Some authors are better historians than they are storytellers. Anthony Riches is brilliant at both. - Conn IgguldenA damn fine read . . . fast-paced, action-packed. - Ben KaneStands head and shoulders above a crowded field . . . . real, live characters act out their battles on the northern borders with an accuracy of detail and depth of raw emotion that is a rare combination. - Manda Scott
Anthony Riches began his lifelong interest in war and soldiers when he first heard his father's stories about World War II. This led to a degree in Military Studies at Manchester University. He began writing the story that would become Wounds of Honour after a visit to Housesteads in 1996. He lives in Hertfordshire with his wife and three children.
GOR008210594
9781473628717
1473628717
Betrayal: The Centurions I by Anthony Riches
Anthony Riches
The Centurions
Used - Very Good
Hardback
Hodder & Stoughton
2017-03-09
400
N/A
Book picture is for illustrative purposes only, actual binding, cover or edition may vary.
This is a used book - there is no escaping the fact it has been read by someone else and it will show signs of wear and previous use. Overall we expect it to be in very good condition, but if you are not entirely satisfied please get in touch with us
Trustpilot