Victory in the Kitchen Annie Gray 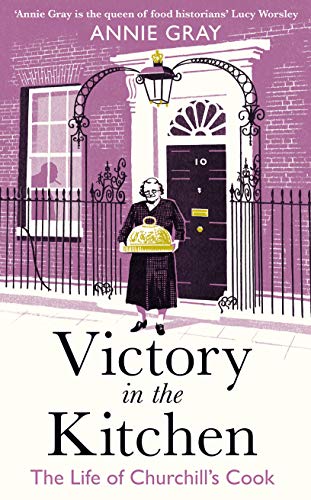 Victory in the Kitchen by Annie Gray

Victory in the Kitchen: The Life of Churchill's Cook by Annie Gray

'Zingy, fresh, and unexpected: Annie Gray, the queen of food historians, finds her perfect subject. A book to devour.' - Lucy Worsley This is the story of a woman who was not a royal, not rich, not famous, simply someone who worked hard and enjoyed her life. Beginning in 1882, she ranged through life in the country, life in the town, life in her own house, and in that of others. She travelled, married, had children and a highly successful career. For while Georgina Landemare saw herself as ordinary, her accomplishments, and the life she lived, were anything but. She started her career as a nursemaid, and ended it cooking for one of the best-known figures in British history, Winston Churchill, a man to whom food was central, not only as a pleasure by itself, but as a diplomatic tool in a time when the world was embroiled in a worldwide war. Victory in the Kitchen is a culinary biography: a life lived through food, ranging from rural Berkshire to wartime London, via Belle Epoque Paris and prohibition-era New York. Through one eager eater, and one skilled cook, Annie Gray contextualises twentieth century food through two figures who were both intimately involved with it. Recipes include Georgina's German Kougelhof, Curried Brains, macaroons, Boodles Orange, Mousse de Maple and 'Chocolat Cake Good'.
Zingy, fresh, and unexpected: Annie Gray, the queen of food historians, finds her perfect subject. A book to devour -- Lucy Worsley
Popular history at its very best * Daily Mail *
Engaging ... appeals to three national obsessions: the preparation and presentation of food; the lost world of great households, above and below stairs; and the private life of a national hero, Churchill * The Times *
Victory in the Kitchen ... recreates a corner of early 20th-century domestic life * Spectator *
Deliciously entertaining * Daily Mail *
Praise for Annie Gray's * The Greedy Queen *
Had me at the first sentence -- Nigel Slater
Annie Gray is a brilliant writer and scholar who brings a glorious combination of enthusiasm and greed to every subject she tackles. In the field of food history she leads the pack -- Jay Rayner
Gray writes with great authority, verve and confidence * The Times *
Wonderfully researched and entertaining * Spectator *
Gray is an inventive researcher ... she likes to get close up to the everyday past * Spectator *
Annie Gray is an historian, cook, broadcaster and writer specialising in the history of food and dining in Britain from around 1600 to the present day. She has presented TV history documentaries including Victorian Bakers and The Sweetmakers, and appears on BBC Radio 4's The Kitchen Cabinet. She lives in East Anglia.
GOR010521836
9781788160445
1788160444
Victory in the Kitchen: The Life of Churchill's Cook by Annie Gray
Annie Gray
Used - Like New
Hardback
Profile Books Ltd
2020-02-06
400
N/A
Book picture is for illustrative purposes only, actual binding, cover or edition may vary.
The book has been read, but looks new. The book cover has no visible wear, and the dust jacket is included if applicable. No missing or damaged pages, no tears, possible very minimal creasing, no underlining or highlighting of text, and no writing in the margins
Trustpilot