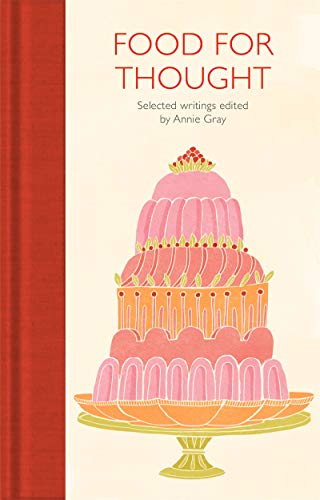 Food for Thought by Annie Gray

A gorgeous anthology of poetry, fiction and essays about food from your favorite classic authors.

A delicious anthology of classic food writing to satisfy every palate, this gorgeous book will delight food lovers everywhere.

Part of the Macmillan Collector's Library; a series of stunning pocket size classics. These beautiful books make perfect gifts or a treat for any book lover. This edition is edited and introduced by food historian, lecturer and broadcaster Annie Gray.

From ancient times to today's celebrity chefs, people have always been inspired to write about food. In this delectable collection, Food for Thought, food historian Annie Gray has chosen an array of material to entertain and inspire. The variety is impressive - from lavish feasts in classical times to street food of pea soup and eels in 19th century London, and from how to find food on a desert island to meat free meals by Agnes Jekyll. Brimming with satire on Victorian etiquette, intriguing recipes through the centuries and culinary advice from cooks and hosts, there is so much here to enjoy.

Dr Annie Gray is one of Britain's leading food historians. She is the author of several books, including The Greedy Queen: Eating with Victoria, Victory in the Kitchen: The Life of Churchill's Cook and The Official Downton Abbey Cookbook. She is the resident food historian on BBC Radio 4's culinary panel show, The Kitchen Cabinet, and has consulted on, and appeared in, a number of television documentaries. She's also in demand as a speaker and as a consultant to the heritage industry, having worked with organizations ranging from English Heritage to the National Trust and Historic Royal Palaces.

GOR011902160
9781529032611
152903261X
Food for Thought: Selected Writings by Annie Gray
Annie Gray
Macmillan Collector's Library
Used - Very Good
Hardback
Pan Macmillan
2020-10-27
256
N/A
Book picture is for illustrative purposes only, actual binding, cover or edition may vary.
This is a used book - there is no escaping the fact it has been read by someone else and it will show signs of wear and previous use. Overall we expect it to be in very good condition, but if you are not entirely satisfied please get in touch with us
Trustpilot