All the Drowning Seas Alexander Fullerton 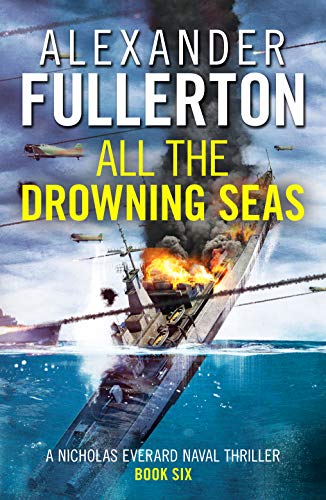 All the Drowning Seas by Alexander Fullerton

All the Drowning Seas by Alexander Fullerton

The sixth thrilling instalment of the Nicholas Everard thrillers.

1942. As Japanese invasion fleets sweep across the Pacific, a handful of Allied ships prepare for a last-ditch battle at Surabaya in the Java Sea. Not only is the Allied force doomed to defeat: any surviving ships will be trapped, since escape routes are blocked by the enemy.

Nick Everard, commanding the cruiser Defiant, is badly wounded in the battle. His ship is heavily damaged and to make matters worse, he has a battered US destroyer under his protection. But unless Everard can find some way out of the trap, both ships and crews face destruction...

All the Drowning Seas presents compelling action at sea, and establishes Alexander Fullerton as one of the premier novelists of naval warfare.

'The prose has a real sense of urgency, and so has the theme. The tension rarely slackens.' Times Literary Supplement

Alexander Fullerton was a bestselling author of British naval fiction, whose writing career spanned over fifty years. He served with distinction as a gunnery and torpedo officer during World War Two. His first novel, Surface!, sold over 500,000 copies. Fullerton is perhaps best known though for his nine-volume Nicholas Everard series, which was translated into many languages, winning him fans all round the world. His fiftieth novel, Submariner, was published in 2008, the year of his death.

GOR011558653
9781800320352
1800320353
All the Drowning Seas by Alexander Fullerton
Alexander Fullerton
Nicholas Everard Naval Thrillers
Used - Very Good
Paperback
Canelo
20210408
384
N/A
Book picture is for illustrative purposes only, actual binding, cover or edition may vary.
This is a used book - there is no escaping the fact it has been read by someone else and it will show signs of wear and previous use. Overall we expect it to be in very good condition, but if you are not entirely satisfied please get in touch with us
Trustpilot