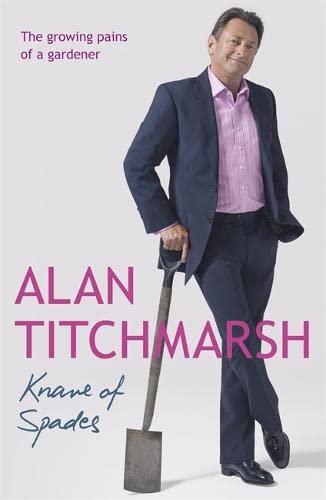 Knave of Spades by Alan Titchmarsh

In this warm, funny memoir Alan Titchmarsh takes us from gardener's apprentice to favourite TV presenter.

Knave of Spades: Growing Pains of a Gardener by Alan Titchmarsh

When Alan left school at fifteen little was expected of him. An 'O' level in art is not the most obvious passport to success, but in the ancient greenhouses of the local nursery Mrs T's little lad found his spiritual home, learning his trade and the strange ways of human nature.

But the comfort and familiarity of his home in the Yorkshire Dales would soon be left behind as he journeyed south to college and then to Kew Gardens where he encountered rare plants collected by Captain Cook and a varied assortment of eccentrics in the world's most famous garden.

Spells as a teacher and editor followed, until fate took a hand when he landed a job on BBC's Nationwide as their gardening presenter. His childhood dream of inheriting the mantle of gardening god Percy Thrower was beginning to come true...

From the first faltering steps in radio and television, to a career in broadcasting and writing, Knave of Spades is a wonderfully warm and self-deprecatingly honest memoir. Alan Titchmarsh shows us just why he has become not only our favourite gardener, but a popular writer and broadcaster too.

This book is a sheer delight and the humour and wry, self-effacing descriptive energy make it a total page-turner * Sun *
Alan Titchmarsh talks about his career with warmth, humour and an enthusiasm that never wanes * Woman's Weekly *
Alan Titchmarsh is known to millions through the popular BBC TV programmes British Isles: A Natural History, How to be a Gardener, Ground Force and Gardeners' World. He has written more than forty gardening books, as well as seven best-selling novels and his first 2 volumes of memoirs Trowel and Error and Nobbut a Lad. He was made MBE in the millennium New Year Honours list and holds the Victoria Medal of Honour, the Royal Horticultural Society's highest award. He lives with his wife and a menagerie of animals in Hampshire where he gardens organically.
GOR001467426
9780340953044
0340953047
Knave of Spades: Growing Pains of a Gardener by Alan Titchmarsh
Alan Titchmarsh
Used - Very Good
Hardback
Hodder & Stoughton General Division
2009-09-17
320
N/A
Book picture is for illustrative purposes only, actual binding, cover or edition may vary.
This is a used book - there is no escaping the fact it has been read by someone else and it will show signs of wear and previous use. Overall we expect it to be in very good condition, but if you are not entirely satisfied please get in touch with us
Trustpilot