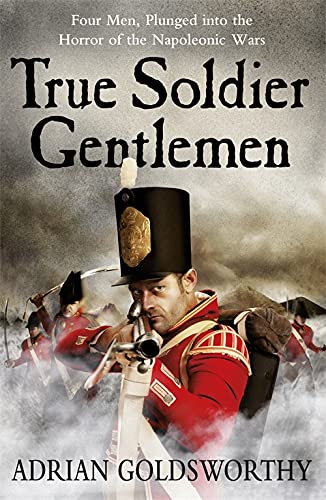 A brilliant Napoleonic historical fiction series from one of the UK's brightest young historians, for fans of Sharpe.

Raw recruits march under the summer sun. But on distant shores a terrible event is about to sing its siren's song to the true soldier gentlemen of Britain. For it is 1808, and the Peninsular War is about to erupt . . .

Meet the men of the 106th Foot, a new regiment staffed by young gentlemen who know nothing of war. William Hanley is in the army because he has no other livelihood. Hamish Williams, a man without money or influence, is hoping war will make his name. Their friend Billy Pringle believes the rigours of combat will keep him from the drinking and womanising that are his undoing. And for George Wickham, battle is simply another means of social climbing.

When the band of four are plunged into a savage war against the veteran armies of Napoleon, they find their illusions shattered and their lives changed for ever as they face the brutality of the battlefield . . .

Combining the vivid detail of a master historian with the engaging characters and pulsating action of a natural storyteller, True Soldier Gentlemen is perfect for fans of Bernard Cornwell, Patrick O'Brian, C.S. Forester, Allan Mallinson and Simon Scarrow.

'It's so well written, flows so well, that the detail does not drag you down . . . a fantastic read, well written, well laid out and absorbing from start to finish' Goodreads reviewer

'Having now read quite a few novels set during the Napoleonic Wars, I was extremely impressed by Adrian Goldsworthy's knowledge of the period and his ability to relate this to the reader without it reading like a history text' Goodreads reviewer

In this Jane Austen-meets-Bernard Cornwell novel, Goldsworthy brilliantly evokes the reality of life - and death - in the early 19th century British Army * Daily Mail *
Take a distinguished historian, a long and bloody war against an apparently invincible enemy, and you have a good recipe for what promises to be a classic series * Good Book Guide *

Adrian Goldsworthy has a doctorate from Oxford University. His first book, THE ROMAN ARMY AT WAR, was recognised by John Keegan, the General Editor of THE HISTORY OF WARFARE, as an exceptionally impressive work, original in treatment and impressive in style. His other books include THE PUNIC WARS, and the volume on Roman warfare in John Keegan's CASSELL HISTORY OF WARFARE series. He has lectured on Roman history in both the UK and USA.

GOR003726994
9780753828366
0753828367
True Soldier Gentlemen by Adrian Goldsworthy
Adrian Goldsworthy
The Napoleonic Wars
Used - Very Good
Paperback
Orion Publishing Co
2011-11-10
400
N/A
Book picture is for illustrative purposes only, actual binding, cover or edition may vary.
This is a used book - there is no escaping the fact it has been read by someone else and it will show signs of wear and previous use. Overall we expect it to be in very good condition, but if you are not entirely satisfied please get in touch with us
Trustpilot