The Lies of the Land Adam Macqueen 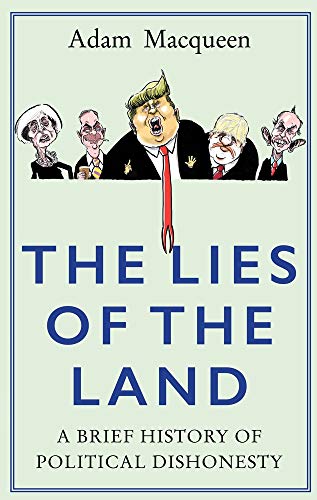 The Lies of the Land by Adam Macqueen

The Lies of the Land: An Honest History of Political Deceit by Adam Macqueen

Trust in our politicians is at an all-time low. We're in a post-truth era, where feelings trump facts, and where brazen rhetoric beats honesty. But do politicians lie more than they used to? And do we even want them to tell the truth?

In a history full of wit and political acumen, Private Eye journalist Adam Macqueen dissects the gripping stories of the biggest political lies of the last half century, from the Profumo affair to Blair's WMDs to Boris Johnson's GBP350 million for the NHS. Covering lesser known whoppers, infamous lies from foreign shores (I did not have sexual relations with that woman), and some of the resolute untruths from Donald Trump's explosive presidential campaign, this is the quintessential guide to dishonesty from our leaders - and the often pernicious relationship between parliament and the media.

But this book is also so much more. It explains how in the space of a lifetime we have gone from the implicit assumption that our rulers have our best interests at heart, to assuming the worst even when - in the majority of cases - politicians are actually doing their best.

Sure to find an eager audience... Like a sort of giant supermarket sweep through the dodgier aisles of Westminster, in which the author dashes round collecting up all the best
reasons never to trust the establishment again, it's lively entertainment

* Observer *
The perfect bedside book * Guardian on THE PRIME MINISTER'S IRONING BOARD *
Fun [and] digestible... There is something staggering about the sheer weight of untruthfulness that oozes from the pages. * Prospect *
Irresistibly enjoyable... Funny, colourful and always insightful -- Dominic Sandbrook * historian, columnist and television presenter *
An excellent guide through the thickets of political mendacity. Brilliantly-researched, intelligent, and lucid, this book is essential reading -- Matthew D'Ancona * author of Post Truth and Guardian columnist *
Forensic and hilarious... Macqueen tells the highly entertaining tale of how lying comes so easily to those who should be the most accountable * Miles Jupp - presenter, BBC Radio 4's The News Quiz *
The best book about political dishonesty that I've ever read or my name isn't Neil Hamilton! * Lloyd Langford - comedian *
Hilarious and troubling * Daily Mail on The Prime Minister's Ironing Board and Other State Secrets *
Vignettes of British political life from the whimsical to the downright chilling . . . delightfully gossipy * Financial Times on The Prime Minister's Ironing Board and Other State Secrets *
Full of wry, waspish humour * The Scotsman on The Prime Minister's Ironing Board and Other State Secrets *
Adam Macqueen has worked at Private Eye on and off for fourteen years. He was assistant, deputy and finally acting editor of The Big Issue between 1999 and 2002. He is the author of the acclaimed bestsellers The Private Eye: The First 50 Years and The Prime Minister's Ironing Board and Other State Secrets.
GOR008762968
9781786492494
1786492490
The Lies of the Land: An Honest History of Political Deceit by Adam Macqueen
Adam Macqueen
Used - Very Good
Hardback
Atlantic Books
20170907
352
N/A
Book picture is for illustrative purposes only, actual binding, cover or edition may vary.
This is a used book - there is no escaping the fact it has been read by someone else and it will show signs of wear and previous use. Overall we expect it to be in very good condition, but if you are not entirely satisfied please get in touch with us
Trustpilot