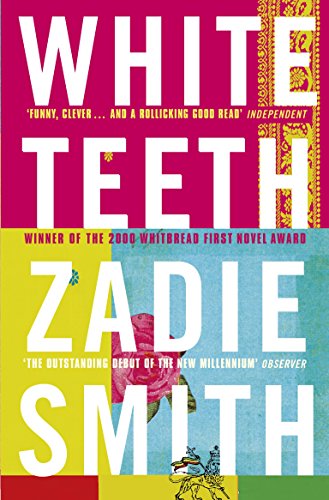 'White Teeth' is a comic epic of multicultural Britain which tells the story of immigrants in England over a period of 40 years.

Published in the first month of the first year of the new century, Zadie Smith's debut novel White Teeth - winner of the Guardian First Book Award and the Whitbread First Novel Award - was an immediate bestseller and stunningly acclaimed.

One of the most talked about fictional debuts of ever, White Teeth is a funny, generous, big-hearted novel, adored by critics and readers alike. Dealing - among many other things - with friendship, love, war, three cultures and three families over three generations, one brown mouse, and the tricky way the past has of coming back and biting you on the ankle, it is a life-affirming, riotous must-read of a book.

'An astonishingly assured debut, funny and serious ... I was delighted' Salman Rushdie

'The almost preposterous talent was clear from the first pages' Julian Barnes, Guardian

'Quirky, sassy and wise ... a big, splashy, populous production reminiscent of books by Dickens and Salman Rushdie ... demonstrates both an instinctive storytelling talent and a fully fashioned voice that's street-smart and learned, sassy and philosophical all at the same time' New York Times

'Outstanding ... A strikingly clever and funny book with a passion for ideas, for language and for the rich tragic-comedy of life' Sunday Telegraph

'Do believe the hype' The Times

Zadie Smith was born in north-west London in 1975. Her debut novel, White Teeth, won the Whitbread First Novel Award, the Guardian First Book Award, the James Tait Black Memorial Prize for Fiction, and the Commonwealth Writers' First Book Prize, and was included in TIME 100 Best English-language Novels from 1923 to 2005. Her second novel, On Beauty, was shortlisted for the Man Booker Prize and won the Orange Prize for Fiction. She has written two further novels, The Autograph Man and NW, a collection of essays Changing My Mind, and also edited short story anthology The Book of Other People. Zadie Smith was chosen by Granta as one of its twenty best young British novelists in 2003, and as well as to Granta has contributed writing to the New Yorker and the Guardian.

Zadie Smith is the author of the novels White Teeth, The Autograph Man, On Beauty, NW and Swing Time, as well as a novella, The Embassy of Cambodia, and a collection of essays, Changing My Mind, and editor of The Book of Other People. Zadie was elected a fellow of the Royal Society of Literature in 2002, and was listed as one of Granta's 20 Best Young British Novelists in 2003 and again in 2013. White Teeth won multiple awards including the James Tait Black Memorial Prize, the Whitbread First Novel Award and the Guardian First Book Award. On Beauty was shortlisted for the Man Booker Prize and won the Orange Prize for Fiction, and NW was shortlisted for the Baileys Women's Prize for Fiction. Zadie Smith is currently a tenured professor of fiction at New York University and a Member of the American Academy of Arts and Letters.
GOR001238363
9780140297782
0140297782
White Teeth by Zadie Smith
Zadie Smith
Used - Very Good
Paperback
Penguin Books Ltd
2000-11-30
560
Winner of WH Smith Book Awards: New Talent 2001 Winner of Whitbread Book Awards: First Novel Category 2000 Short-listed for Whitbread Book Awards: Book of the Year 2000 Short-listed for Orange Prize for Fiction 2000
Book picture is for illustrative purposes only, actual binding, cover or edition may vary.
This is a used book - there is no escaping the fact it has been read by someone else and it will show signs of wear and previous use. Overall we expect it to be in very good condition, but if you are not entirely satisfied please get in touch with us
Trustpilot