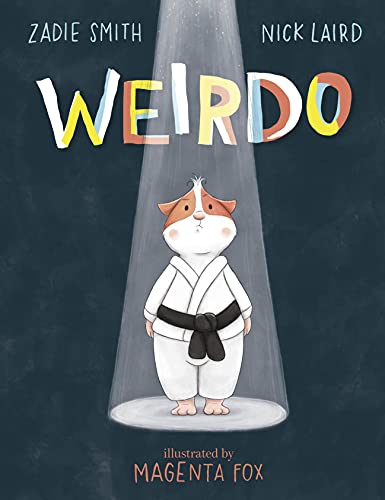 Meet Maud: a guinea pig who inexplicably wears a judo suit - and not everyone understands or approves. When Maud is thrown into a new and confusing situation, it takes brave decisions and serendipitous encounters for her to find her place and embrace her individuality.

Weirdo is an endearing story about the quiet power of being different by two veteran writers, and introduces an exciting debut illustrator. Together they have created a picture book that adults and children alike will treasure.

Zadie Smith (Author)
Zadie Smith is the author of the novels White Teeth, The Autograph Man, On Beauty, NW and Swing Time, as well as two collections of essays, Changing My Mind and Feel Free, and a collection of short stories, Grand Union.
White Teeth won multiple awards, including the James Tait Black Memorial Prize, the Whitbread First Novel Award and the Guardian First Book Award. On Beauty was shortlisted for the Man Booker Prize and won the Orange Prize for Fiction, and NW was shortlisted for the Baileys Women's Prize for Fiction.
Zadie Smith is currently a tenured professor of fiction at New York University and a Member of the American Academy of Arts and Letters. She is a regular contributor to the New Yorker and the New York Review of Books.

Nick Laird (Author)
Nick Laird was born in Northern Ireland in 1975 and was educated at the University of Cambridge and Harvard University. He has published two novels, Utterly Monkey and Glover's Mistake, and three collections of poetry, To a Fault, On Purpose and Go Giants. He has also edited Zoo of the New: Poems to read Now, an anthology of poetry, new and old, alongside Don Paterson.
Laird is the recipient of many awards for his fiction and poetry, including the Betty Trask Prize, the Rooney Prize for Irish Literature, the Geoffrey Faber Memorial Prize, and the Somerset Maugham Award. A Fellow of the Royal Society of Literature and a 2016 Guggenheim Fellow, he teaches Creative Writing at Columbia University in New York.
Twitter: @NickLaird
Website: nicklaird.com

Magenta Fox (Illustrator)
Magenta Fox was born in south-west London in 1994. She studied English at the University of Exeter and since moving back to London in 2015, has been working as a children's book designer. These days she works freelance - illustrating, writing and designing children's books from her flat in south London.

GOR012280577
9780241449608
024144960X
Weirdo by Zadie Smith
Zadie Smith
Used - Well Read
Hardback
Penguin Random House Children's UK
20210415
32
null null null null null null null null null null
Book picture is for illustrative purposes only, actual binding, cover or edition may vary.
This is a used book. We do our best to provide good quality books for you to read, but there is no escaping the fact that it has been owned and read by someone else previously. Therefore it will show signs of wear and may be an ex library book
Trustpilot