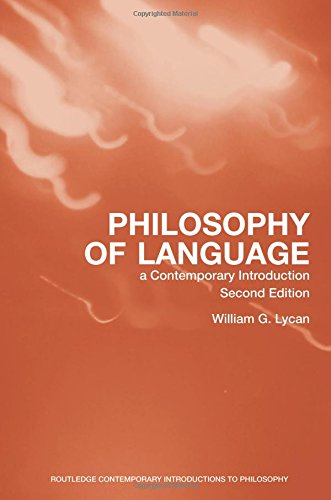 Introduces students to the main issues and theories in twentieth-century philosophy of language, focusing specifically on linguistic phenomena. This book surveys the competing theories of linguistic meaning and compares their various advantages and liabilities.

Philosophy of Language: A Contemporary Introduction by William G Lycan

Philosophy of Language: A Contemporary Introduction introduces the student to the main issues and theories in twentieth century philosophy of language, focusing specifically on linguistic phenomena.

Topics are structured in four parts in the book. Part I, Reference and Referring Expressions, includes topics such as Russell's Theory of Desciptions, Donnellan's distinction, problems of anaphora, the description theory of proper names, Searle's cluster theory, and the causal-historical theory. Part II, Theories of Meaning, surveys the competing theories of linguistic meaning and compares their various advantages and liabilities. Part III, Pragmatics and Speech Acts, introduces the basic concepts of linguistic pragmatics, includes a detailed discussion of the problem of indirect force and surveys approaches to metaphor. Part IV, new to this edition, examines the four theories of metaphor.

Features of Philosophy of Language include:

"This exceptional text fulfills two essential criteria of a good introductory textbook in the philosophy of language: it covers a broad range of topics well, all of which are the basis of current active research, and does so in an accurate manner accessible to undergraduate students." -Mike Harnish, University of Arizona

"...an excellent textbook for teaching. the examples throughout are delightful and students will love them." -Edwin Mares, Victoria University of Wellington