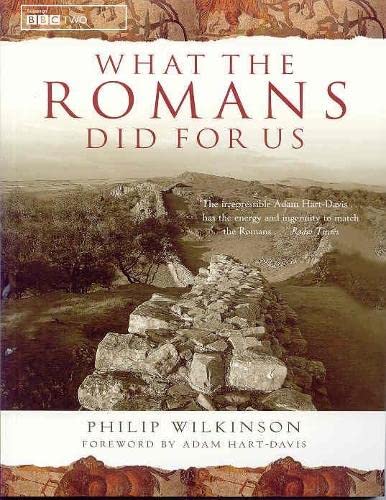 What the Romans Did for Us by Philip Wilkinson

The beautifully illustrated and informative companion to the successful BBC 2 television series.

What the Romans Did for Us by Philip Wilkinson

From frescoes to fast food, bridges to bikinis, the Romans brought us a variety of innovations that changed the landscape of Britain and the lifestyle of its inhabitants for ever. The Romans were mass-producers, capitalists and bureaucrats who during their 400-year stay in Britain built dozens of towns and miles of roads, leaving a fascinating and complex legacy that forms the basis of much of our technology today.

Based on the BBC series of the same name, presented by Adam Hart-Davis, What The Romans Did For Us investigates the innovations that Romans brought to our shores and assesses their considerable impact on our lives. It features demonstrations and reconstructions of extraordinary Roman devices, and provides an alternative, dynamic history of the people that transformed Britain.

'The irrespressible Adam Hart-Davis.... has the energy and ingenuity to match the Romans...' Radio Times

'What makes any programme to do with Adam Hart-Davis fascinating is that he doesn't just tell you things... he actually gets his feet wet.' The Times

Philip Wilkinson is a writer and editor with over 40 books to his credit. His books include Eyewitness History of the World, Encyclopedia of Ideas that Changed the World and The Shock of the Old published by Channel 4 Books.
GOR001253565
9780752261720
075226172X
What the Romans Did for Us by Philip Wilkinson
Philip Wilkinson
Used - Very Good
Paperback
Pan Macmillan
2001-07-20
9999
N/A
Book picture is for illustrative purposes only, actual binding, cover or edition may vary.
This is a used book - there is no escaping the fact it has been read by someone else and it will show signs of wear and previous use. Overall we expect it to be in very good condition, but if you are not entirely satisfied please get in touch with us
Trustpilot