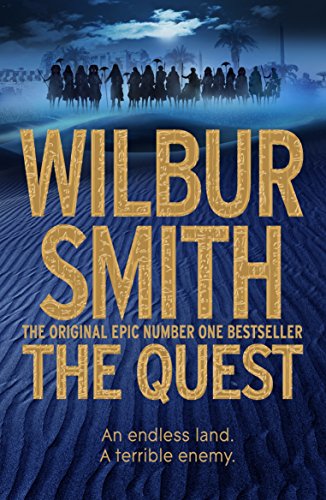 The Quest by Wilbur Smith

The Quest by Wilbur Smith

'You can get lost in Wilbur Smith.' - Stephen King

Wilbur Smith returns with the final part of his thrilling Egyptian series. Following on from River God, The Seventh Scroll and Warlock, The Quest continues the story of the warlock, Taita, wise in the lore of the ancient Gods and a master of magic and the supernatural.

Egypt is struck by a series of terrible plagues that cripple the Kingdom, and then the ultimate disaster follows. The Nile fails. The waters that nourish and sustain the land dry up. Something catastrophic is taking place in the distant and totally unexplored depths of Africa from where the mighty river springs.

In desperation, Pharoah sends for Taita, the only man who might be able to reach the source of the Nile and discover the cause of all their woes. Yet none of them can have any idea of the terrible enemy that lies in ambush for the warlock in those mysterious lands at the end of their world.

You can get lost in Wilbur Smith. -- Stephen King
Smith writes with a fresh, crisp style . . . full of zest. A gratifying read, long awaited by his legion of admirers. * Daily Express *
Wilbur Smith was born in Central Africa in 1933. He was educated at Michaelhouse and Rhodes University. He became a full-time writer in 1964 after the successful publication of When the Lion Feeds, and has since written over thirty novels, all meticulously researched on his numerous expeditions worldwide. In addition to his Egyptian novels, River God, The Seventh Scroll, Warlock and The Quest, his other titles include the successful The Courtneys and The Ballantynes series, Those in Peril and Vicious Circle, featuring security operative Hector Cross, and The Sunbird. His books are now translated into twenty-six languages.
GOR006370805
9781447267096
1447267095
The Quest by Wilbur Smith
Wilbur Smith
The Egyptian Novels
Used - Very Good
Paperback
Pan Macmillan
2014-10-09
640
N/A
Book picture is for illustrative purposes only, actual binding, cover or edition may vary.
This is a used book - there is no escaping the fact it has been read by someone else and it will show signs of wear and previous use. Overall we expect it to be in very good condition, but if you are not entirely satisfied please get in touch with us
Trustpilot